Okay, a few caveats. I am most definitely not the target audience for Trolls: World Tour – because I’m not 8 years old. That disconnect makes reviewing this film difficult, because what I see isn’t what an 8 year-old sees. The character design alone made me nauseous; but they’ll love it. 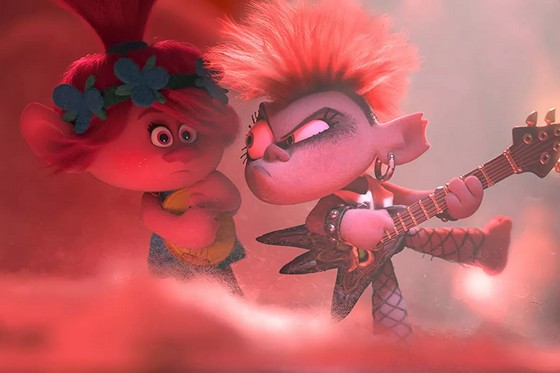 The film operates on a superficial level that’s perfect for younger children. They’ll delight in the bright colours, revel in the pop heavy soundtrack and maybe even learn something. For the adults who take them to see it though, it’s likely to be a trial.

Trolls: World Tour is, unsurprisingly, a sequel to Trolls (2016), and features many of the same characters. Poppy and Branch are the main trolls – voiced respectively by Anna Kendrick and Justin Timberlake. In this film, the trolls discover are in fact six different Troll tribes scattered over six different lands devoted to six different kinds of music: Funk, Country, Techno, Classical, Pop and Rock. But this uneasy Middle Earth of neon-pastel is about to be disrupted. Hard-rock trolls leader, Queen Barb (Rachel Bloom) has a bizarro plan to destroy all other kinds of music to let rock reign supreme. With the fate of their world(s) at stake, Poppy and Branch, along with sidekick Biggie (James Corden), set out to visit all the other lands to unify the Trolls in harmony against Barb.

Of course, the whole point of the exercise is a cynical commercial tie-in to sell Trolls dolls; but hey, aren’t most kids’ movies a commercial product in one way or another? Directors Walt Dohm and David P. Smith inject a kind of manic energy into the film. So much so, it reminded me of a 6 year-old’s birthday party after everyone’s had some red cordial. The script from a screenwriting team led by Jonathan Aibel (Kung Fu Panda 3) is simplicity itself.

Anna Kendrick (A Simple Favour) and Justin Timberlake lend gusto – and their considerable musical talents – to the project. Indeed, the whole voice cast is great. I even warmed a little to James Corden as the goofy Biggie. Mary J Blige, Sam Rockwell and Kelly Clarkson (among many others) make cameo voice appearances – if that’s even a thing.

Trolls: World Tour is lowest-common-denominator fare for under-10s – who will surely lap it up as quick as you can say “ooshies”. For adults, it’s more like a cleverly designed torture device (you won’t realise how much you’re suffering until you’re in it). But there is one consolation – you can impress your small people by “guessing” the completely predictable ending before you even go in.