In writer-director Ladj Ly’s Les Misérables, cop Stéphane (Damien Bonnard) has just moved to Paris. He’s joined a tough unit – an anti-crime squad, patrolling the impoverished Paris suburbs of Montfermeil*, where many residents live in crowded high-rise apartments. His immediate superior, Chris (Alexis Manenti), is a piece of work. He starts by giving Stéphane a disrespectful nickname. From there, it becomes clear Chris enjoys throwing his weight around. 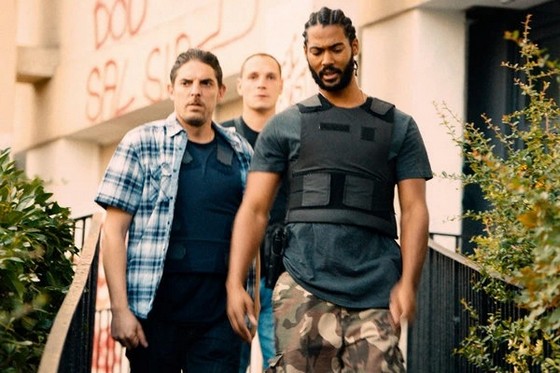 To say Stéphane’s first day on the job is an eye-opener is an understatement. Several distinct groups each have their own way of doing things. The district’s players include a power-hungry character known as The Mayor (Steve Tientcheu) and his underlings; an influential Imam, Salah (Almamy Kanouté); a former thug reborn and his supporters; and gypsies who have no love for The Mayor and his boys. Another shady group is in cahoots with the nasty cop.

But arguably the most important cohort are teenagers known as The Bugs, who roam the streets making them their own. Among them is Issa (Issa Perica), who’s constantly testing his father’s patience by getting into trouble. Keeping his distance is a shy kid, Buzz (Al-Hassan Ly). He has a drone via which he records the activity in other high-rise units, Peeping Tom style.

The story takes off when the gypsies – who operate an animal circus – accuse The Mayor’s boys of stealing something most valuable to them. The cops intervene to ensure bloodshed is narrowly averted. But the situation quickly escalates out of control.

Les Misérables is a film of gritty realism. It’s hardly pretty – far from it. Shady characters and corruption are rife. So is yearning for a better life.

Inspired by the 2005 Paris riots, this is the work of first-time feature film co-writer and director Ly, who maintains everything is based upon reality. It takes a while for the action to heat up – the best part of half the movie. But when it does, it explodes and just where it will end up remains an unknown. The ending is incendiary and that second half had me on the edge of my seat.

Manenti is suitably repulsive as the bad cop. Bonnard, in turn, comes across as appropriately frustrated as Stéphane, the squad newbie. I also appreciated the calm demeanour – in the face of provocation – of Almamy Kanouté as the Imam. The two key youngsters were compelling in their respective roles, one as a cocky live wire who turns through happenstance and the other as a bookish nerd.

I was shocked; and that element of surprise is the film’s greatest asset, as the first act dragged. In summary then, if slice of life drama is what you are after, Les Misérables ends up delivering.

* Montfermeil is where Victor Hugo set part of his classic novel Les Misérables.