An ambitious but unusual take on the superhero/high concept sci-fi genre, Project Power has quickly become one of the most watched movies on the streaming giant Netflix platform. This slick action film seems to be setting itself up for a potential franchise.

On the streets of New Orleans an experimental new drug known as Power is being sold. The result of a top secret government operation in collaboration with shady defence contractor the Taleios corporation, the drug is “the next evolution of the human species” and gives people extraordinary superpowers for about five minutes, making them either invisible, bulletproof, super strong, etc. The source of the pill’s powers come from animals. But it has unpredictable effects and can also prove deadly. And you have no idea of the effects when you take the pill, making it even more of a risk. The evil Taleios corporation has apparently been conducting tests of the drug using the criminal elements of the city as guinea pigs. 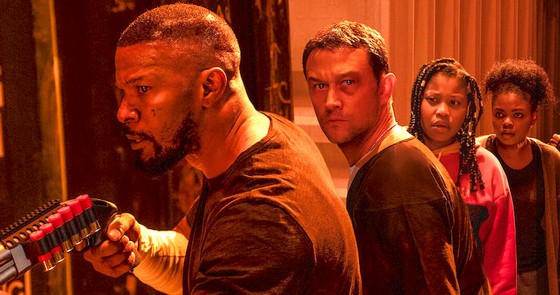 Frank Shaver (Joseph Gordon-Levitt) is a rogue New Orleans cop who is trying to bring down the people responsible for dealing the drug. Art (Jamie Foxx) is a decorated former Marine who is looking for his daughter Tracy, who has been captured by the gang responsible for the drug. Her cellular DNA apparently has healing properties, and she is being used as a test subject to help in the production of the drug. Tracy apparently has the power to bring people back to life, which is why she is so important to the corporation.

The link between these two men is Robin (Dominique Fishback), a resourceful, street-smart dealer and wannabe rapper from whom Frank has been buying the drug for his own use to “level the playing field” when going up against the supercharged villains on the streets. Robin has been pushing the drug in order to earn money to help pay for her mother’s medical treatment. But gets caught up in a dangerous situation when she also agrees to help Art in his quest to rescue his daughter.

Touching on some big themes that have resonance in contemporary America – including greedy corporations, medical experimentation, addiction, and the exploitation of the homeless and African-Americans – Project Power has been written by Mattson Tomlin (the upcoming The Batman), but the intriguing premise is let down by the formulaic plotting, familiar clichés, some stock characters and bland villains (Amy Landecker and Rodrigo Santoro fill two of these roles). The film has been directed by Catfish creators Henry Joost and Ariel Schulman (Paranormal Activity 4) and it’s a bit of a far cry from their previous films. Project Power is quite bloody and violent at times. There are a couple of tough action scenes, but they’re shot in that chaotic fashion that renders them almost incomprehensible.

The film also features some badly rendered computer-generated special effects sequences, especially with one villain bursting into flames and the over-the-top final confrontation on a cargo ship.

Gordon-Levitt has been absent from the scene for a couple of years, and this film marks his return to the screen. He is always has a solid presence, and there is plenty of gritty action here that reminds us of roles in films like End of Watch. There is great chemistry and a prickly dynamic at work between Gordon-Levitt and Fishback (The Hate U Give) here that enhances their scenes together and gives the material some much needed spark. Fishback is great, delivering a spunky performance with plenty of attitude. Oscar winner Foxx (Just Mercy) is largely wasted in a fairly generic role that doesn’t stretch his talents or give him much in the way of nuance.

Cinematographer Michael Simmonds (Cell) gives the material a suitably noir-like look and feel, capturing a gritty, rain drenched vision of New Orleans. There is plenty of hand held camera work, which adds to the kinetic feel of the film.