Deeply entrenched racism is at the centre of a drama in which the result is never in doubt and the journey is designed to provoke outrage. 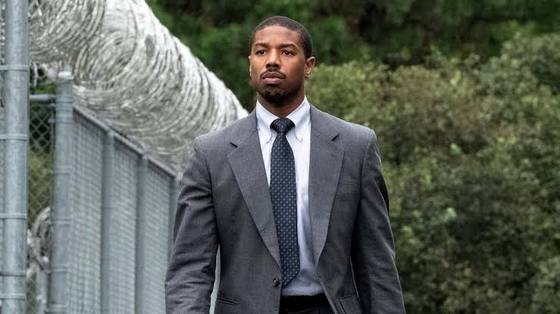 First up, there is the political issue of a civilised society condemning felons to death.  Regardless of your position on that, it is difficult to feel too much sympathy for those who have been incarcerated for perpetrating heinous crimes.

But what if they were wrongly convicted – tried and found guilty in a kangaroo court? That is the contention we are dealing with here.

After graduating from Harvard, young lawyer Bryan Stevenson (Michael B. Jordan – Creed) has his pick of lucrative jobs. But instead, he turns his back on them to head to Alabama and start a legal service to help those on death row not afforded proper representation. With him is a passionate local, Eva Ansley (Brie Larson – Room). One of his first, and most incendiary, cases is that of Walter McMillian (Jamie Foxx – Django Unchained), who, in 1987, was sentenced to die for the notorious murder of an 18-year-old girl. The conviction came despite a preponderance of evidence pointing to his innocence and the fact that the only testimony against him came from a criminal, Ralph Myers (Tim Blake Nelson), with a motive to lie.

In the years that follow, Stevenson becomes embroiled in a labyrinth of legal and political manoeuvrings and overt and unabashed discrimination. Still, he fights for McMillian, and others like him, with the odds – and the system – stacked against them. Of course, green though he is when he starts out with the best of intentions, he is quickly “educated” on the way things work in the deep south.

Many – although not all – of the twists and turns in Just Mercy are obvious. Still, the movie has impact and that is in large part due to the performances.

Michael B. Jordan, Jamie Foxx and Brie Larson – each strong leads in their own right – bring credibility and gravitas to their key roles. There is authority in what they say and do and how they go about it.

The screenplay, by director Destin Daniel Cretin (Short Term 12) and Andrew Langham – based upon the book by Bryan Stevenson – has been written with noble and heartfelt speeches in mind … and they are duly trotted out. I am not entirely convinced the filmmakers got the timing right because the movie felt unnecessarily elongated.

Nevertheless, that is not to say you won’t tear up at certain junctures, indicating that despite its blatancy Just Mercy is affecting.  Rated M.