Following a whirlwind romance in Monte Carlo, a naïve unnamed young woman (Lily James) is swept off her feet by the handsome and debonair and recently widowed Maxim De Winter (Armie Hammer) and marries him. She is whisked off to Manderley, his imposing ancestral mansion on the windswept English coast. But far from an idyllic life, she soon finds that she is living in the shadow of Rebecca, her husband’s first wife who died in tragic circumstances. Manderley’s cruel housekeeper Mrs Danvers (Kristin Scott Thomas) keeps Rebecca’s memory alive. Her lingering presence permeates the house. She seems to be deliberately undermining her efforts to settle into the house. She feels lonely and a bit uncomfortable. And Max himself has a quick temper and seems to be haunted by a guilty secret from his past. 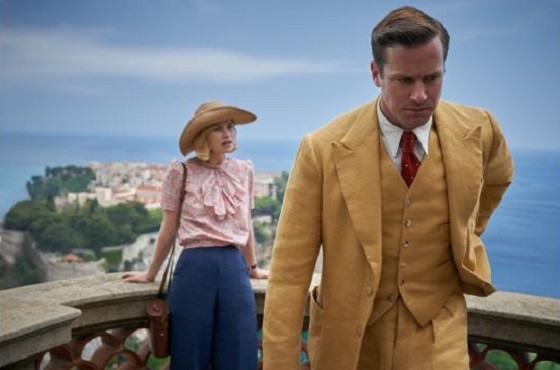 Produced under the auspices of streaming giant Netflix, this is a rather unnecessary remake of Hitchcock’s 1940 classic. Rebecca was Hitchcock’s first American film, an atmospheric mix of Gothic romance and mystery. The film explores themes of class, power, guilt, obsession and secrets. This version (based on the 1938 novel written by Daphne Du Maurier) is more faithful to the source material and gives the story a slightly different and colder tone, accentuating the psychological drama and giving it a more ambiguous morality. The revelations in the final act come at something of a hurried pace, which is a little jarring given the more sedate pacing of the earlier scenes.

Ben Wheatley (Free Fire) normally has a far more aggressive style as evidenced by his handling of his adaptation of J G Ballard’s dystopian futuristic nightmare High Rise. But here he seems much more restrained. While this version is a more sensual take on the novel with a couple of softly lensed sex scenes. However, in the script from Jane Goldman (The Woman in Black) and Joe Shrapnel (Seberg) the relationship between the couple lacks that coolness and distance that shaped the original. Wheatley and his writers have brought back a couple of key plot points that were dropped from Hitchcock’s film due to the censorship code of the time. Du Maurier herself was reportedly unhappy with the 1940 film version.

This is a beautifully crafted film that looks gorgeous though. Plenty of great period detail emerges, with the cars and costumes reeking of authenticity and evoking the feel of the classic Hollywood films of yesteryear. But whereas the original was shot in glorious black and white, which accentuated the uneasy atmosphere, here Wheatley’s regular cinematographer Laurie Rose has shot in colour, which somehow mutes the effect.

Thomas (Military Wives) brings an air of severe icy attitude and hint of malice to her role as the cruel housekeeper Mrs Danvers, but she lacks the edge that Judith Anderson brought to the role in the original. She gives us a slightly different take on the character and her presence dominates the film. And Hammer (Call Me By Your Name) is particularly bland and colourless as the enigmatic and emotionally distant De Winter. Sam Riley (Control) makes an impression as Jack, Rebecca’s cousin, who is still consumed by a mix of grief and anger over her death. James (Yesterday) brings an ambiguous quality to her interpretation of the naive unnamed heroine, through whose perspective we see events (the role originally played by Joan Fontaine).

This remake of Rebecca will probably be a satisfactory mix of Gothic romance and psychological mystery, especially for those unfamiliar with Hitchcock’s original. But audiences would also do well to try and check out the original, which demonstrates why Hitchcock is still one of the most admired and respected filmmakers of all time.