Yesterday is highly contrived and holds few surprises, but it’s still a heart-warming story. It’s also a showcase for the music of The Beatles. 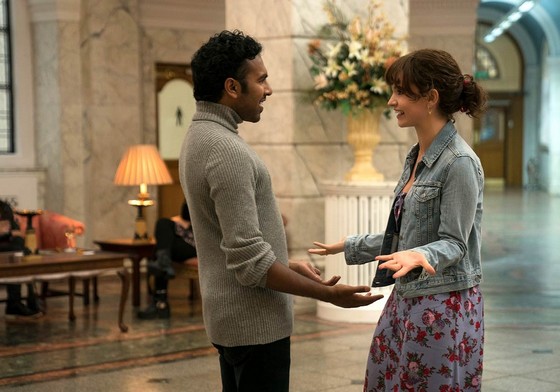 The basis of the tale is pure fantasy and from there it’s basically an adult fairy story. The film follows a decidedly ordinary guy thrust into most extraordinary circumstances. Humour, warmth and romance abound.

Jack Malik (Himesh Patel) is a struggling singer-songwriter whose dreams of fame are rapidly fading. That’s despite the fierce devotion and support of his childhood best friend, Ellie (Lily James). But after a freak bus accident during a mysterious global blackout, Jack wakes up to discover that – as far as everyone else is concerned – The Beatles never existed. He decides to cash in by re-hashing Beatles songs as his own. Suddenly doors start opening and he is being feted the world over. Still, he pays a high price for his change of fortune and it takes him a while to deal with that. He will come to realise that adulation alone isn’t all it’s cracked up to be.

Richard Curtis (Notting Hill) provides the screenplay for Danny Boyle (Slumdog Millionaire) to direct. The quirky characters give the piece an edge.

Himesh Patel is readily relatable as Jack. He represents the low-key hero caught up in an incredible situation. In a beautifully nuanced performance, Lily James (Mamma Mia! Here We Go Again) makes the most of her role as the dutiful friend and confidante who wants something more. Joel Fry ensures we don’t readily forget the zany roadie, Rocky. I also appreciated the matter-of-fact portrayal of Jack’s parents by Meera Syal (Patrick) and Sanjeev Baskar (Paddington 2). As for Ed Sheerin, does the brilliant musician not have a weakness? He makes this acting gig look effortless, though playing his scripted self. But arguably the scene-stealer was Kate McKinnon (The Spy Who Dumped Me) who plays up a ruthless, money-hungry agent for all it’s worth.

Notwithstanding its obviousness, Yesterday is endearing lightweight fun,