Both a prequel and a sequel to Mamma Mia! from 2008 , Mamma Mia! Here We Go Again is a lightweight, fun-filled romp.

In 1979, high-spirited Donna, Tanya and Rosie – aka Donna and the Dynamos – graduate from Oxford University. Donna joyfully embarks on her adventures through Europe to fulfil her destiny on the Greek island of Kalokairi.  On her journey,  she makes the acquaintance of – and sleeps with – three attractive young men, Harry, Bill and Sam. 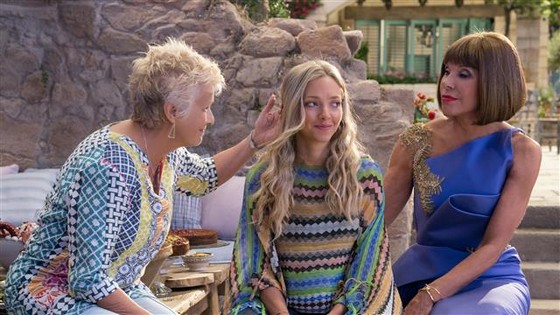 Donna’s happy and sets her mind on making this magical island her new home. She finds a singing job in the local taverna and shelter in a ramshackle farmhouse.  However, when she discovers Sam – the man of her dreams – is engaged to another woman, her heart breaks.  Tanya and Rosie swoop in to save their friend, but it turns out she doesn’t need rescuing.   As she waves goodbye, Donna’s optimism is restored knowing she’s expecting a child.

On present day Kalokairi, Sophie Sheridan (Amanda Seyfried), Donna’s daughter, has dedicated herself to fulfilling her mother’s dream of renovating the taverna she owned. Sophie plans to transform it into the Hotel Bella Donna. Mum Donna (Meryl Streep) passed away a year earlier. However she has the total support of her stepfather, Sam (Pierce Brosnan) – one of her three possible biological fathers, along with Bill (Stellan Skarsgård) and Harry (Colin Firth). Sophie’s boyfriend, Sky (Dominic Cooper), has accepted a hospitality job in New York.

Donna’s best friends, Tanya (Christine Baranski) and Rosie (Julie Walters) arrive on the island for the lavish grand opening. Sophie’s hotel manager, Señor Cienfuegos (Andy Garcia), warns that a terrible storm is approaching.   Sophie is distraught as the wind and rain pound the island and her opening party plans are left in tatters. But fear not for all will shine again.

I really liked the way the filmmakers handled the twin stories, cutting back and forth between the two. Without putting a stopwatch to it, each appeared to receive even treatment … and they worked individually and collectively. Direction and screenplay is by Ol Parker, who also wrote The Best Exotic Marigold Hotel.

Lily James brings loads of energy and sass to the role of the recently graduated Donna in the 1979 segments. As Sophie, Amanda Seyfried goes from mournful to reflective to joyous as she channels her mum. In fact all the women in the family have particularly strong voices. That includes Meryl Streep, who only appears briefly as the more mature Donna. Cher appears as Sophie’s self-centred grandmother, who comes into play late in the piece with her healthy ego intact. Cher’s arrival was met with applause in the preview screening I attended. Her rendition of “Fernando” is wonderful.

And naturally there’s more of that infectious ABBA music.

The best lines in the piece go to two of the supporting cast. First a passport officer, played by Iranian-British actor Omid Djalili, who comments on the appearance of those who come before him. He’s quite a hoot. And then there’s the female bar owner, a role filled by Maria Vacratsis, who invites Sophie to stay on the island. She speaks her mind. Finally, look out for a couple of cameos from the male half of ABBA.

You don’t have to have seen the original to appreciate this sequel, but it would probably make more sense if you did. Mamma Mia! Here We Go Again is a popcorn charmer.