Groundhog Day gets a killer twist in Happy Death Day. In this clever teen horror film pays tribute to the slasher films of the 80s, a college student is brutally murdered, but gets to relive that day repeatedly until she can uncover the identity of her killer. 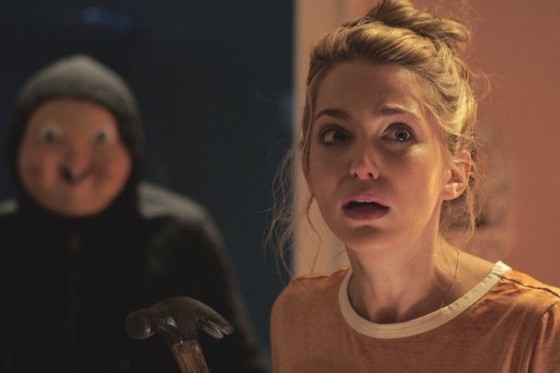 Tree Gelman (played by Jessica Rothe) is a spoiled, selfish and narcissistic party girl. She wakes up in the dorm room of the good-natured Carter (Israel Broussard), hungover after a big night out. She makes her way across campus to her own sorority house where she immediately clashes with bitchy house queen Danielle (Rachel Matthews). Her roommate Lori (Ruby Modine), reminds her it’s her birthday and presents her with a cupcake. This is a fact Tree greets with disdain, as her birthday serves as an annual reminder of a dark time in her life. She’s also estranged from her father, whose birthday calls she ignores. Tree progresses through her routine and prepares to head out to a party that night. But on her way, she is attacked by a stranger wearing a creepy baby-face mask who stabs her to death. Suddenly, Tree wakes up and must relive the whole day over again. And again… until she can identify the killer, prevent her death and stop this cycle.

As she relives the day again and again she tweaks her encounters, and looks for clues to help identify her mysterious attacker. She begins to take charge of her own destiny. She even enlists Carter to help her with her investigation. Every day she has to explain her situation to the bemused Carter. Following his advice, she draws up a list of suspects who would want to kill her. It’s a long list – and includes her roommate Lori, a professor with whom she’s having an affair, a former boyfriend, and anyone else she’s ticked off with her attitude.

Writer Scott Lobdell deftly mixes tropes of the slasher genre with some of the usual clichés of the college campus comedy – Sorority Row meets Mean Girls via Scream, if you will. This is then mixed with the DNA of time loop films like Edge Of Tomorrow. He works in a few red herrings and some misdirection that will keep audiences guessing until the end. His script also has the same sort of self-awareness that drove the Scream films. Masked killers have been a terrifying staple of the horror genre since the 80s with the likes of Friday The 13th’s Jason Voorhees and Halloween’s Michael Myers. But somehow the killer here lacks that same malevolent edge that drove those superior films.

The casting of Rothe also works a treat. This is a breakout role for the actress who has mainly been stuck in B-grade TV series like Mary + Jane or in small roles in films like La La Land. She’s on screen the entire duration of the film. The premise needed a strong actor in the central role to hold our attention and make us empathise with her. When the film starts, Tree is not a particularly likeable person. But as it progresses she grows in confidence and slowly strips away her hardened, cynical veneer. Rothe brings a wonderful mix of bitchiness, strength, vulnerability and energy to her performance. Although her character is put through an emotional and physical wringer, she’s clearly having a lot of fun here. There’s also good chemistry between Rothe and Broussard.

Director Christopher Landon is best known for his work on the Paranormal Activity franchise. Thankfully here he has forgone the found-footage aesthetic and opted for a more conventional narrative structure. He also tones down the gore and bloodletting, preferring to emphasise the campier elements of the plotting. The repetition of Tree’s day never gets tired or boring. With each iteration of her day, Tree grows as a person, much like Bill Murray’s character in the classic Groundhog Day, as she tries to atone for past mistakes and insults and turn her life around.

Happy Death Day actually works a treat, especially if you are prepared to go with the flow and don’t attempt to over analyse its central plot machinations.