When the name Ridley Scott is mentioned in reference to a new science fiction series, it’s a certainty that there will be droves of fans who need to check out what the legendary director has been spending his time on.  Raised by Wolves, you may be completely unsurprised to discover, features Androids. 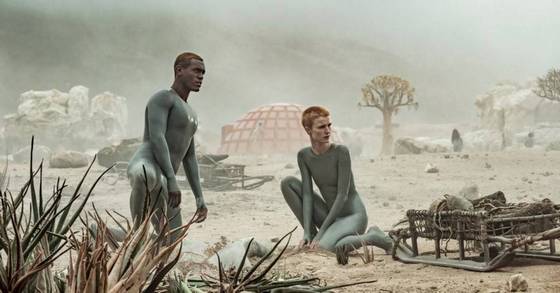 With Earth decimated by religious wars, two Androids (most firmly atheist in their beliefs) are sent to Keplar 22-b with a directive to grow and raise new humans away from their home planet.  Mother (Amanda Collin) and Father (Abubakar Salim) are both self aware but only to a point. The pair are six hundred light years away from their original Earth masters and as the years roll on, still very much determined to populate their new barren planet by children raised without a faith.

The one surviving child of the original six embryos grown in external pods (attached umbilically to Mother) is Campion (Winta McGrath).  A little different from the others since birth, Campion has plenty of questions to put to his shiny suited parents as to why the other children all died and why Mother is so hostile to the idea of any visitors.  When the Mithraics (the believers) eventually arrive, they are mighty curious as to why an Android is attempting to pass herself off as a human female.  They learn pretty fast its best not to cross Mother.

The two Androids (let’s be loose about this – Mother is a flying banshee screaming killing machine) are a curious and uneasy couple to watch. For your viewer’s comparison, the pretty eyed Travis Fimmel (of Vikings fame) and his partner appear as the human counterfoil.  The two human visitors aren’t however presenting their true selves to the world, having previously strongarmed an Android medic to fashion them new faces (out of some horrific and magic cellular goo which bonds tight to their skulls) in order to impersonate two people they have just murdered, and thus take their places on the evacuation ship headed for Keplar.  Yes, I know that’s a bit exhausting to take in.

(Goo is a big feature of Raised by Wolves, just so you know, as are splattery chunkfests when Mother gets a bit peeved.  It starts with the jellybaby foetuses in the first episode, and only gets grosser as time rolls on).

As with all science fiction, there are certain rules that need to be bedded in pretty early.  The two android characters are a charming and frightening mix of nurture and murder, of course like all parents, driven half mad by their fast growing offspring who all need regular feeding, story times and life lessons about how to be self-resilient in a hostile environment.  Father is the more ‘human’ of the two, earnestly trying to insert Christmas cracker quality jokes into the narrative whenever he deems it appropriate, regularly shutdown fast by the flinty eyed Mother who is a far more efficient machine.

There’s plenty of economically staged scenes in Raised by Wolves that your teenagers could probably recreate in an empty classroom or in the spare lot next door.  Filmed in South Africa, Raised by Wolves has a limited landscape of dirt, huts and scrub in the first few episodes with all of the CGI budget it seems spent on Mother when she’s in full murdering flight mode (metallic Metropolis style). Make no mistake, she is glorious, but the howling at the moon stuff… cringeworthy.   Amanda Collin does a sterling job with the often muddy and inconsistent dialogue she’s been tasked to deliver, and even our adored Travis Fimmel seems to get an uneasy squint in his eyes over some of the gambolling about he is required to do as the sneaky planetary interloper.

Check your finely honed understanding of science fiction tropes at the door and you will be just fine with Raised by Wolves.  This is easy, kick back viewing that doesn’t require a lot from the viewer, and anyone who has watched enough robot and alien critter flicks over Scott’s career will find this entertaining, escapist viewing.

Raised by Wolves is dropping an episode a week (though there’s rumours of a break now that the three initial episodes have all premiered) on FOXTEL Showcase, and is able to viewed also via FOXTEL on Demand/FOXTEL Now or Binge.