Slim Dusty was an Australian icon. No arguments there. He was the first Aussie to have an international number 1 hit song with A Pub with No Beer. One hundred plus albums, record sales topping eight million and an unrivalled 45 Golden Guitar awards. Impressive numbers by any measure. 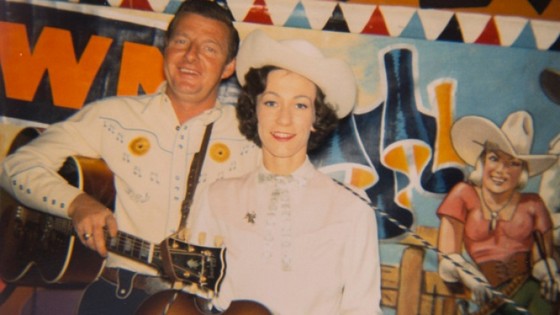 Born David Gordon Kirkpatrick in 1927 (and passing away in 2003), Slim was driven to his life calling from an early age. The bush balladeer was most at home on the road, crisscrossing the country, visiting towns, including remote aboriginal settlements, the length and breadth of this vast continent. But, arguably, he would not have enjoyed anywhere near the success he had without the help, guidance and love of his equally talented songwriter wife, Joy McKean. The engaging and informative documentary Slim & I, which features those with whom he worked, alongside some of the biggest names in the music business he inspired, makes that perfectly clear.

The pragmatic Joy (at age 90, she is still penning new songs daily) kept him on the straight and narrow. The pair toured for up to 10 months a year. They did so first with their daughter Anne and then with son, David, in tow. Anne speaks of how she originally thought that’s how all families lived. Both kids were eventually sent to boarding school. Joy was clearly devoted to Slim; and he was beholden to her.

As a child Joy contracted polio, which resulted in a calliper on one of her legs, but that certainly didn’t adversely impact her career. She and her sister Heather took to the stage when still young. Joy would write the songs and the pair would perform them together. The “simple” lyrics – which created “mind pictures” – would strike a chord, as they have continued to do throughout her life, with fans and fellow artists alike. Happenstance would see Slim join Joy, Heather and a small band of others on the road and the rest, as the saying goes, is history.

This reverential portrait, which charts Slim and Joy’s lives, is the work of acclaimed filmmaker Kriv Stenders (Red Dog). It is presented as an illustrative book, with an evocative soundtrack throughout. The score, naturally, comes in the form of the music that made Slim and Joy such pillars of the industry and relatable crowd favourites. Mind you, apart from hearing Slim in full voice performing them, contemporary artists such as Paul Kelly, Kasey Chambers, Missy Higgins, Keith Urban and Troy Cassar-Daley also get in on the act.

A large amount of archival footage gives Slim & I a sense of authenticity. It points to a man and a woman on a shared mission – of lives well lived, boundaries broken, new paths forged and opening up avenues for others. Anything but pretentious, the doco has an easy-going charm.