Captivating imagery and insights into a brilliant but troubled mind come from one of Australia’s foremost contemporary artists and is wife of 27 years in this evocative documentary. Brett Whiteley is an Australian cultural icon. Nearly a quarter century after his death, you could argue there has never been anyone in the history of Australian art quite like him.

Whiteley is a visual journey into his life – which was dazzling, erratic, combustible and tragic – and legacy. He adored his wife and muse Wendy (they met when she was 15 and he 17) but also had numerous affairs. Many of his most successful paintings were odes to Wendy. 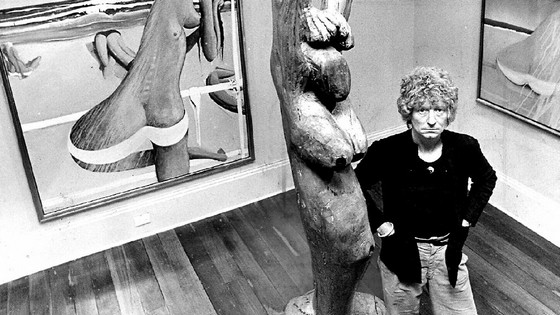 When tackling the life of Brett Whiteley, it’s almost impossible not to categorise his public persona into some very distinct types. There is the pure artist who knew his art history backwards but would cry when one of his own favourite paintings was sold to a stranger. Then you have the volatile egotist who could be destroyed by the smallest criticism but who was fearless in painting large the most intimate of his inadequacies.

And that is not to overlook the showman entrepreneur who would put on full tilt glitz and tinsel openings even as he complained about his work not being taken seriously. Whiteley was full of such incongruities and contradictions.

Despite the tabloid headlines, Whiteley’s life as an artist was defined by a vigorous work ethic, an exhaustive commitment to study the work of others and a willingness to take risks in his own work. In the end and despite his inglorious demise, Whiteley was able to produce an outstanding body of work that elevated him beyond his notoriety into the international echelons of preeminent modern artists.

Writer/director James Bogle says Brett Whiteley was always destined to paint his life large in great big red letters across the art world and he only knew one way to do that. “He believed that all great artists were larger than life. He believed in the fantastical romance of towering ‘characters’ like Van Gogh and Dali and believed that he needed a story to equal that stature.”

For all that it reveals, Whiteley also held back and was too restrained and reverential. I wanted to know far more from those in the know about what he went through during the dark periods. And when reflecting upon the sexual subtext in much of his work, it would have been a bonus to perhaps hear from one of two of his female “conquests”, if the filmmakers could have tracked them down and they were willing to speak. I supposed that is akin to Kylie Minogue speaking about Michael Hutchence, which she has done. As it is, apart from his former spouse, few others really troubled the scorer in any appreciable way.

Of merit is the fact that the direction the doco went established beyond doubt that what made him great also destroyed him. His whole modus operandi was to push boundaries and himself … and eventually the demons won out.

Stylistically, the documentary is mighty special, bringing to life still pictures through the clever use of technology. If you don’t know much about Whiteley, this will help you gain an appreciation of his lifestyle and accomplishments. But, above all else, his rich and varied repertoire showcases his genius. Rated M, Whiteley scores a 7 out of 10.