Dudes, welcome to the most bodacious time-travel, rock music, metaphysical mind-warp of the year. Bill & Ted Face the Music – the loooooong (30 years or so) awaited sequel to Bill & Ted’s Excellent Adventure (1989) and Bill & Ted’s Bogus Journey (1991) – brings laughs, weirdness and “the greatest song ever written”. 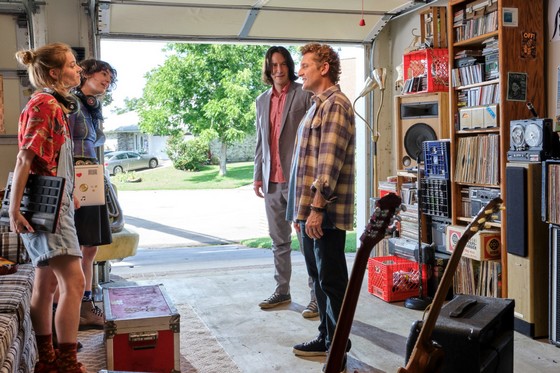 Director Dean Parisot (RED 2) and writers Chris Matheson and Ed Solomon (who penned the first two movies) keep it light, even as they deal with a time-travel conundrum that would test even Christopher Nolan’s patience. If you’ve seen the first movie, you might recall the guys needed a good grade on a history paper. Here, the stakes are the entire fabric of space and time unravelling. But their goofy approach to the material keeps the film (mostly) zipping along. The script generates plenty of laughs (which, yes, we can all use right now). And even though it’s pretty much the same story arc as Trolls: World Tour (!), I’m happy to forgive that in deference to Bill and Ted’s manic energy.

Former Wyld Stallions Bill (Alex Winter) and Ted (Keanu Reeves) are still searching for that one great song. Their music careers have gone nowhere, but at least they’re married to Joanna (Jayma Mayes) and Elizabeth (Erinn Hayes) respectively. They live as middle-aged dads in suburban anonymity. Both dote on their daughters Thea (Samara Weaving) and Billie (Brigette Lundy-Paine), who show every sign of following in their fathers’ footsteps – in that they’re 24, unemployed and still living at home. But just as Ted is thinking about throwing in the whole music thing, Kelly (Kristin Schaal) arrives from the future with a dire message. Long story short, unless they come up with the greatest song of all time in the next 75 minutes, the universe is going to collapse, ending all life.

So basically in real time (but hey, when is time ever really “real” dudes?) Bill and Ted have to travel in time – using the same phone box from the original film – to find the song and “steal” it from their future selves. Thea and Billie meanwhile travel back in time to put a band together.

You can tell Bill & Ted Face the Music isn’t a “serious” time-travel movie, because the characters break the first rule of time-travel movies – you can’t interact with yourself in the future. Bill and Ted encounter several – increasingly disturbing – versions of themselves, often with hilarious results. The journey of Billie and Thea however provides the movie (and maybe the franchise) with much-needed impetus. I think it certainly helps if you’re at least familiar with the premise of the earlier Bill & Ted movies, if not the plots. Otherwise, a lot of the jokes will probably go over your head.

I don’t know if it’s the script, the performances or directorial choices, but some of the dialogue seemed stilted. Alex Winter is great as Bill, but Keanu Reeves’ blank expression made it hard to relate to Ted. Contrast though Brigette Lundy-Paine as Billie and Samara Weaving as Thea. Both women give wonderfully energetic performances as ciphers of their screen fathers from an earlier time. Comedian Kristin Schaal is under-utilised in a mostly straight role as Kelly. Two smaller performances though stand out. Anthony Carrigan (Barry) is hilarious as a conflicted robot. William Sadler meanwhile reprises his role as Death with impeccable comic timing.

Bill and Ted Face the Music is the archetypal “pretty good” movie. It’s never going to win awards, but it’s an engaging diversion. For those who remember the earlier movies, this is like putting on a comfortable pair of slippers. These familiar characters are like old friends. And doesn’t everyone enjoy catching up with old friends?