You can’t say you don’t know what you’ll get with a John Wick movie, because that was very much established in the last two installments.

The story starts with bloodied and retired super assassin John Wick (Keanu Reeves) just minutes away from having a $14 million bounty put on his head. He has killed a member of the shadowy international assassin’s guild, the High Table, and is thereby declared excommunicated. Suddenly, hit men everywhere are out to collect. Remember, Wick is a quietly lethal man who simply wants to live in peace with his dog following the loss of his beloved wife Helen. But he has crossed the line and the High Table serves as a kind of underground justice system. 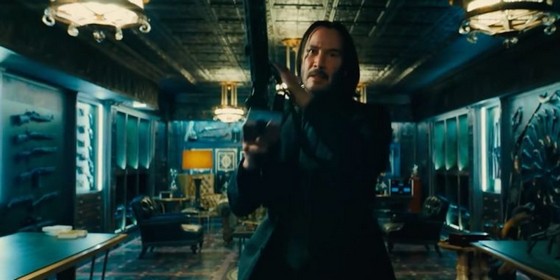 Apart from Keanu Reeves’ return, Laurence Fishburne is again the pigeon-loving powerful Bowery King and Ian McShane the imperious manager of New York’s Continental Hotel, Winston. Both are powerful men in their own right, who won’t be pushed around, as is the elegant and helpful Continental concierge Charon (Lance Reddick). New to the franchise is Halle Berry as kick ass Sofia who, literally, works alongside two attack dogs. As for John Wick’s greatest adversary, in this case it is an equally potent assassin known as Zero (Mark Dacascos).

Consistency, though, is the name of the game here. The same writer Derek Kolstad and director Chad Stahelski have been at the helm of 2014’s John Wick, 2017’s John Wick: Chapter 2 and this one, although the writing is now a four-way collaboration.

Parabellum showed promise, but copped out with some cheap one-liners and easy outs at the death (if you pardon the pun) in the name of keeping the franchise going. Also, the elongated fight scenes in the third act just became repetitive and tiresome. And I should add there are only so many guns you can shoot, blade fights you can get into, motorbikes you can run off the road and panes of glass you can shatter.

Excess has always been the byword on John Wick films, but notwithstanding that here I reckon they’ve gone way, way, way over the top. For the most part though there is still an elegance about the orchestration of the dark plotting until we reach that point. It is also slickly produced – the action sequences are skilfully choreographed.

While, to the benefit of the film, all the familiar names are back, one thing you can also count on is however broken, shot, cut, battered and bruised John Wick is, he always comes up trumps. Of course, he does! So, if you are after more of the same with added steroids, John Wick 3 is just the ticket.