Like it or not, race has long been a theme – and a flashpoint – in American cinema. Films like The Birth of a Nation and Gone With the Wind presented a distinctly white – even outright racist – view of the issue. Things began to change in the 1960s with films like Guess Who’s Coming to Dinner and In the Heat of the Night. Both those featured Sidney Poitier (a major star by that time) but still looked at racial issues through a white lens. Then came the incendiary films of Spike Lee that finally brought a distinctly black view to the table. Director Melina Matsoukas looks to walk in Lee’s shoes with Queen & Slim, but falls a little short. 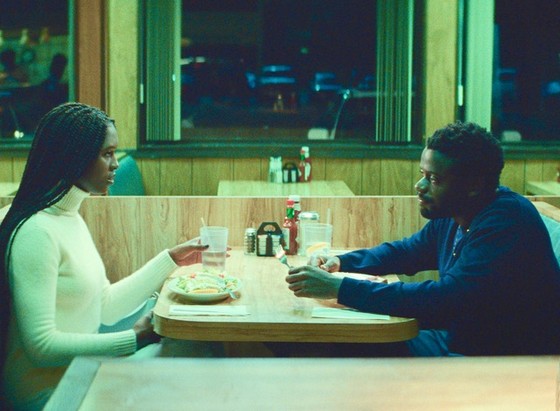 Matsoukas has a long CV in mainly music videos and TV (notably the series Insecure). Here she works from a script by Lena Waithe (Master of None). The resulting film is a vivid portrait of the black experience. But it’s undone a little by a meandering final third that stalls rather than drives the narrative. That third act weirdly features a Lord of the Rings-style multiple ending, which drains the film’s climax of its power.

The film opens somewhere in Ohio. Queen (Jodie Turner-Smith) and Slim (Daniel Kaluuya) are on a date. Things aren’t exactly catching fire between them. He’s a reserved Christian; she’s a lawyer who’s passionate about her work. They seem to have little in common. After dinner, Queen asks Slim for a lift home. On the way, they’re pulled over by a police officer (Sturgill Simpson). After a tense encounter, a gun is drawn and tragedy ensues. Queen is shot, and the officer dies at the scene. Chastened by her experience with the criminal justice system, Queen urges Slim to “just drive”. A vague plan emerges to head to New Orleans – a very long drive – to speak with Queen’s uncle, Earl (Bokeem Woodbine). But soon the pair realise it won’t be an easy journey.

Queen & Slim walks a delicate line. It’s billed as a kind of Bonnie-and-Clyde adventure, but doesn’t want to make its protagonists “bad” people. I’m not sure it gets the balance right the whole time.  It wants to make its dialogue authentic, but it sometimes lapses into doggerel. And it features several characters making some very strange choices – so strange they sometimes strain credibility (including in that climactic scene). The script includes a huge number of improbable events and unlikely coincidences. Maybe Matsoukas and Waithe were aiming for this to be a kind of fantasy world where bizarre things can happen for no apparent reason. Or maybe they intended it as a kind of folk tale, where details are embellished beyond what actually happened. But if that’s so, it wasn’t obvious in the final product.

Still, what works for the film is the undeniable chemistry between the lead characters once they’re actually on the road. Jodie Turner-Smith (The Last Ship) and Daniel Kaluuya (Widows) make a fine couple. The actors deftly portray the characters’ journey from indifference to love as their circumstances become increasingly dire. Bokeem Woodbine provides a colourful foil as the unstable Uncle Earl.

DOP Tat Radcliffe (Pride) provides some memorable images of the American landscape. His unerring eye for contrasts between the beautiful and the ramshackle is astounding. Given Matsoukas’ background in music videos, it’s not surprising that the film features a soundtrack showcasing hip-hop and R’n’B artists, including Lauryn Hill.

Although it tries to deliver a political message, Queen & Slim is at its best when it focuses on the relationship between its protagonists. The flabby final act does it a disservice and robs it of what should have been a powerful ending. Still, while it’s definitely not on the level of Do the Right Thing, the film remains a stark reminder that race isn’t going to fade away as an issue in America any time soon.