What a grand show and a great experience Kurios is. Artistic excellence, ingenuity and reinvention are the keys to the ongoing success of the world’s preeminent circus, Cirque du Soleil (Circus of the Sun). Kurios continues a fine tradition and as the title suggests, it features a cabinet of curiosities – the forerunner to museums containing artefacts – evident the moment you enter the Big Top or Grand Chapiteau at Flemington Racecourse. 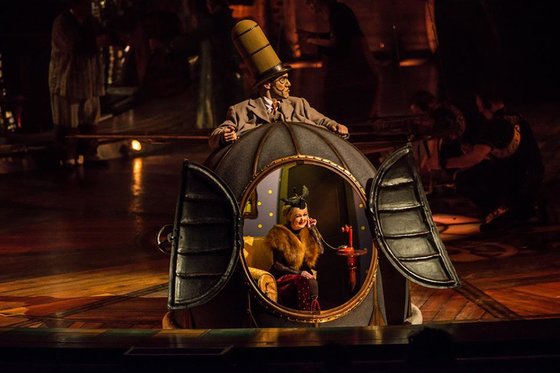 The theme is steampunk and it is the evocative props and costumes that have immediate impact before the performance starts. I have witnessed a great deal of circus over many decades, but when Cirque du Soleil came along in 1984 it raised the bar and has continued to do so ever since. Kurios – its 35th production – is a fusion of creativity, capability and cooperation, transporting us back to the future.

Steam engines and gramophones are combined with mesmerising acts of strength, skill, balance and fluidity. And we mustn’t forget the good humour. A cast of 47 from 17 countries gives us the finest acrobats, gymnasts, clowns and musicians. Many of the routines require a symbiotic relationship between couples or groups – born of total trust – to ensure they are at one. The best analogy I can draw is that to an Olympic gold medal performance in synchronised diving.

Ideas rich, Kurios is the brainchild of writer and director Michael Laprise. It is a fantasy set in the latter half of the 19th century and features a collection of otherworldly characters. The centerpiece is one known as the Seeker, who is convinced there exists a hidden, invisible world – a place where the craziest ideas and the grandest dreams await.

The show features six acts in each half over all but two hours, excluding interval. An old steam train – initially represented by toys carried on the backs of three performers – pulls into a station “carrying” a group of eclectic passengers. A strongman flings his lithe and diminutive partner into the air where she performs a series of intricate somersaults.

An aerial bicycle routine follows, after which we are introduced to an invisible miniature circus, in a comedic nod to the traditional circus arts. Two balancing acts are to come before interval, the first involving chair balancing in attempt to reach a suspended chandelier and the other cylinders and planks on a moving platform.

My personal favourite – a troupe of remarkable trampolinists leaping high from a net that straddles the entire stage, at times all but reaching the roof of the Big Top –  is first up after a break. A female audience member is coaxed onto stage, only to be serenaded by a clown, who becomes a bird, a Tyrannosaurus rex and a most convincing cat. Acrobatic “Siamese twins” hanging in the air from straps soar to impressive heights crisscrossing above the stage while performing a synchronised routine.

A master of the yo-yo and yo-yo pairing gives the toy a rapid work out as if it were a pocket watch. A beautiful theatre of mind imbued with simplicity and poetry follows. Artistes use only their fingers to tell a story that is filmed and projected in real time onto a hot air balloon that serves as a screen. The finale sees 13 acrobats form human pyramids, somersaulting and crossing in the air on three levels and standing four high on each other’s shoulders.

Audience awe and adulation rightfully accompanies each act, to which my sparing descriptions do not do justice. Among the most remarkable of the 100 plus costumes featured is that worn by Nico, the accordion man, whose pants are folded like a piece of origami and potbellied Mr Microcosmos who “houses” a small lady. She – his intuitive counterpart, known as Mini Lily – is only a metre tall and the performer who plays her is one of the 10 smallest people in the world. 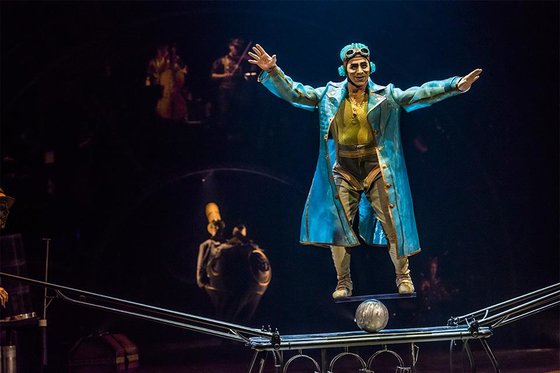 Earlier, I referenced the props. The set design by Stéphane Roy is a reflection of the Seeker’s curio cabinet and references the start of the industrial revolution. Think Jules Verne meets Thomas Edison in an alternate reality. A lively, up tempo original score completes the picture, which results in one of the most unique and mesmerising shows on the planet.

Buy your tickets now. It is a production extraordinaire not to be missed under the Big Top at Flemington Racecourse until 10th May, 2020.