Wow, wow, wow and wow! Just when you think Cirque du Soleil has peaked, up pops the surreal Kurios! It is a blast of perfect entertainment from beginning to end – and that’s after marvelling at the immense Big Top with surprisingly comfortable seating and perfect air conditioning. 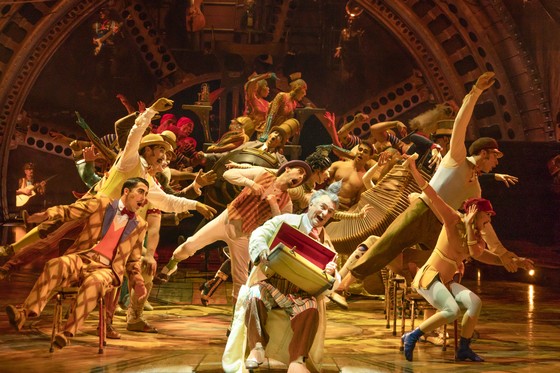 Blasé me, who has seen Cirque du Soleil several times before, expected the entertained, but like a novice I sat gasping, applauding and sometimes watching slack-jawed at the amazing things humans can do with their bodies. And when the cast came for curtain call, I checked my watch; I could not believe the second 50 minutes had past.

Cabinet of Curiosities is set in the latter half of the nineteenth century. A collection of weird and wonderful characters suddenly steps into his equality weird mechanical world. And they are incredibly costumed courtesy of designer Philippe Guillotel. It is rare to get such visual delight from start to finish of any production, but that is what we got from this show. Utter delight and amazement.

What stood out? Everything! But there some acts that caught my imagination the most: Contortion where four female acrobats dressed to form a quartet of deep-sea creatures that resemble electric eels come to life in this stunning and gripping contortion act. The artists perform a series of incredible pyramids and figures at a dazzling speed using a huge Mechanical Hand as a platform.

Acro Net was even more amazing. On a huge sprung net that covered the entire stage and signified the ocean the troupe bounce and rebounded with pure trampoline techniques. The net is tuned so that the artists standing on the surface can use their legs to modulate the the bouncing motion, at times creating a slingshot effect that propels their teammates almost to the top of the big top. It was heart-stopping to watching the man on the trapeze catching his bouncing partner and swing through the air. 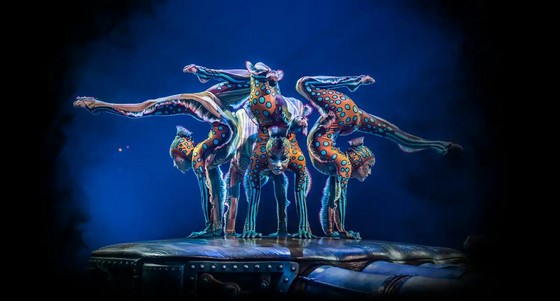 Upside Down World added humour as a dinner guest uses chair balancing to climb up to a mysteriously flying chandelier only to see a mirror image descending from the roof. Amazing. Then 13 artists gave more heart-stopping fun with a spectacular sequence of synchronized acrobatics and human pyramids that showcase the amazing agility of the human body. In addition to standing three and four high on each other’s shoulders, the artists take off, somersault and crisscross in the air on three levels: the ground, a monolith positioned centre-stage, and in the audience. I could not believe a four person high column created from a jump start.

There were more, but – just go and see the show. It is expensive, but you can see where the money has gone! You will not be disappointed even if you don’t see another show his year.