Director Robert Eggers certainly loves a descent into madness. After the refined horror-thriller The Witch, he’s back with another hallucinatory drama in The Lighthouse. Despite having only two characters on screen for much of the time, this is a complex, disturbing examination of human frailty; sprinkled liberally with a variety of myths from different cultures. 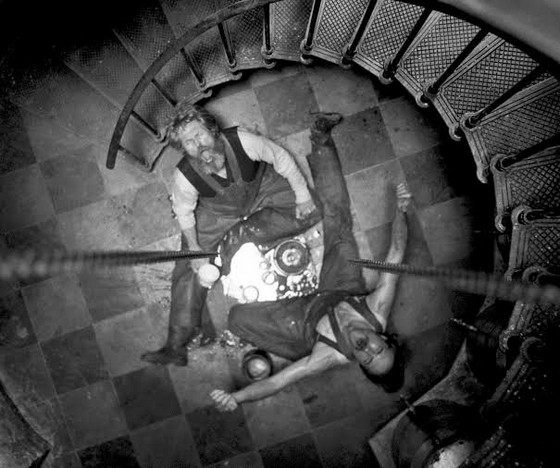 The story itself has a basis in reality. The isolation and loneliness of lighthouse keepers is well documented. Their harsh conditions however culminated in tragedy at Small’s Lighthouse in 1801. The gruesome episode led authorities in the UK to change how lighthouses were manned. The Lighthouse (and a little-seen 2016 film of the same name) tap into these events; though Eggers’ film quickly leaves any pretence at historical accuracy behind.

The Lighthouse opens with old salt Thomas Wake (Willem Dafoe) and his young assistant (Robert Pattinson) being transferred by boat to a lighthouse on a rocky New England island. Their shift is for 4 weeks, during which they have to make sure the light keeps burning. Seems simple enough; but the gruff Wake isn’t about to let his young charge slack off. He sets up a strict division of labour – he’ll tend to the light and the cooking; the young man has to do everything else.

For his part, the young man tries to keep to himself; even to the extent of not telling Wake what his name is. He won’t partake of Wake’s whiskey, and doesn’t particularly want to do anything except survive the 4 weeks and collect his paycheck. The harsh life on the island soon starts to take its toll. Soon the young man suspects there could be disturbingly more to Wake than meets the eye.

Eggers isn’t a director who likes to stick to convention. He and co-writer Max Eggers (yes, his brother) discard the traditional three-act structure in favour of a looser, more flexible approach. The first half of the film rolls along at a fairly languid pace; but the second half really ramps up both the tension and the crazy. The film certainly gets a lot wilder towards the end, culminating in a final shot that’s likely to stay with you for some time. Oscar nominated for this film, DOP Jarin Blaschke uses B&W cinematography and an almost square aspect ratio to great effect. He and production designer Craig Lapthorp combine to make the wind-swept island almost a third character in the film.

As noted, Eggers peppers the film with allusions to mythology. These include some fairly familiar imagery (mermaids, for example) through to some of the more obscure (and violent) Greek myths. Neptune of course gets a big mention, but Odysseus and Prometheus also feature.

Robert Pattinson and Willem Dafoe have to carry the film as the two protagonists. In recent times, Pattinson has followed the example of his Twilight co-star Kristen Stewart by appearing in riskier, non-commercial fare. Here he’s excellent as the taciturn underling. While Dafoe’s is the flashier role, Pattinson does a lot of the “heavy lifting” (no pun intended) in the film. His final spiral downwards is brilliantly executed and neatly controlled. Dafoe does his best Captain Ahab impersonation as Wake. Apparently he uses a regional Maine dialect, making for some colourful but occasionally obtuse speech.

The Lighthouse is a mind-bending journey into the heart of darkness (Joseph Conrad reference fully intended). While it’s sometimes impenetrable and at others quite out-there, this is another film of big ideas and slick execution from Robert Eggers. If you liked The Witch, don’t miss The Lighthouse.