Darkest Hour is a kind of backgrounder on Winston Churchill’s “never surrender” speech. It also touches on the flotilla dispatched to fetch the British troops from the beach at Dunkirk (as to which, see Dunkirk). But this showy biopic has too much emphasis on levity. 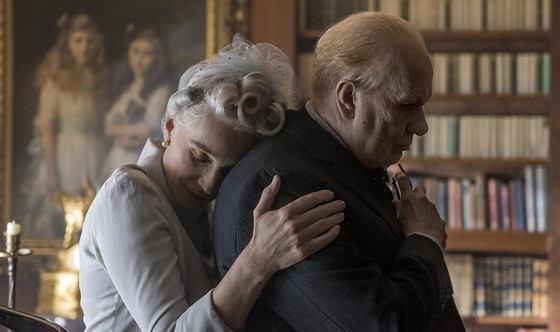 Joe Wright (Atonement) directs from a screenplay by Anthony McCarten (The Theory of Everything). Wright was apparently inspired by the true story of Churchill’s first weeks in office during the early days of WWII.

A witty and brilliant statesman, Churchill (Gary Oldman) is a stalwart member of Parliament. But at age 65, he’s an unlikely candidate for Prime Minister. However the situation in Europe is desperate. Churchill becomes PM as countries fall to the Nazis. With the entire British army cornered in Dunkirk and an imminent threat of invasion, the situation is dire. Churchill finds his own party plotting against him. Some members of the War Cabinet want to sue for peace with Hitler. Even King George VI (Ben Mendelsohn) is skeptical whether his new PM can rise to the challenge.

Churchill is confronted with an unthinkable choice: negotiate a peace treaty with Germany and save the British people at a terrible cost; or fight on against incredible odds. With the support of his loyal wife Clementine (Kristin Scott Thomas), Churchill looks to the British people to inspire him. With the help of his tireless secretary (Lily James), Churchill must put his power with words to the ultimate test. He must write and deliver speeches that will rally his country.

Gary Oldman (The Hitman’s Bodyguard) is barely recognisable as the British statesman and does a fine job with the material. Kristin Scott Thomas (The English Patient) is under-utilised and given a relatively lightweight role as his wife. Lily James (Baby Driver) is ever-present as Churchill’s typist, but ultimately plays little more than a perfunctory role.

The film is heavy on dialogue, and I found myself tuning out on more than the odd occasion. Given the import of what was going down, Darkest Hour lacked the gravitas that I was looking for. That gets back to the writing and direction, neither of which I found totally satisfying.

Both writer and director have positive form, but even though I had an interest in the subject, Darkest Hour turned out to be little more than a curiosity for me. Not their finest hour.