A violent buddy action-comedy with a fierce soundtrack, The Hitman’s Bodyguard plays on its irreverence.

Nearly everybody notoriously lethal hit man Darius Kincaid (Samuel L. Jackson) has ever met wants him dead. But that will only happen if Michael Bryce (Ryan Reynolds) – the bodyguard recruited to protect him – doesn’t shoot him first … out of sheer infuriation. 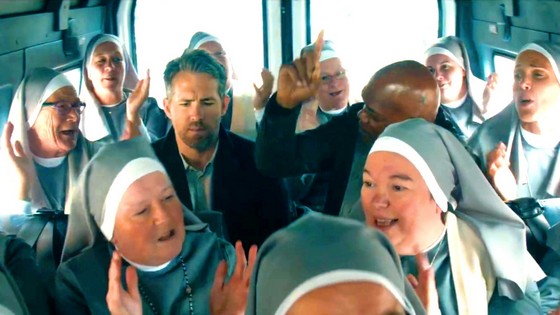 The wild chase begins when Interpol strikes a risky deal with the newly captured Kincaid. If he agrees to be testify against bloodthirsty Belarusian tyrant Vladislav Dukhovich (Gary Oldman) at the International Criminal Court, they’ll release Kincaid’s fierce wife Sonia (Salma Hayek) from jail. There’s just one problem: Interpol has only 24 hours to transport Kincaid from England to The Hague, knowing full well assassins will be trying to hit the hit man the whole way.

Things go wrong right off the bat. Interpol Agent Amelia Roussel (Elodie Yung) leads the prison convoy transporting Kincaid right into an ambush … and it is all downhill from there. Determined to get Kincaid to his destination, she calls on the only guy she knows who can protect the unprotectable: her bitter, burnt-out ex-boyfriend and former hotshot bodyguard, Bryce.

Once Bryce was at the top of the executive protection game, but after a job gone sour, he’s lost his edge. He has everything to prove, but zero desire to prove it with Kincaid. The two are not strangers. In fact, after a long career dodging Kincaid’s bullets, the hit man’s life is the last one Bryce has any inclination to save, let alone risk his own for.

This is one of those films that tries to emulate the best of the genre, and doesn’t quite get there. It has its moments, but they’re limited. At times the material dished up is particularly cringe-worthy. That has to do with the plotting and dialogue, but particularly the latter (the screenwriter is Tom O’Connor). Nor do I think Patrick Hughes’ (The Expendables 3) direction was tight enough.

The Hitman’s Bodyguard is more of everything – more action, violence and mayhem. But as good as the stunts are, it became too much.

Samuel L. Jackson revels in laughing in the face of one dangerous circumstance after another. I liked the chemistry he shared with Ryan Reynolds and Salma Hayek, but thought the connection was missing between Reynolds and Elodie Yung. Gary Oldman makes for a really nasty piece of work as the villain of the piece.

The cinematography in European cities by Jules O’Loughlin (The Duel) is a highlight.

I will also say that despite deep early reservations, I did warm to The Hitman’s Bodyguard as it progressed, notwithstanding the fact that it went on for too long. Rated MA, it scores a 6 out of 10.