British director Edgar Wright (Shaun of the Dead) was raised on a diet of Hollywood genre films, but his quirky sensibility and sense of humour subverts the usual tropes of the genre. His Hot Fuzz was a loving homage to those American crime films he enjoyed watching. A decade on he returns to the crime genre with Baby Driver, an immensely entertaining heist film/car chase thriller set in Atlanta. He has left behind Britain and his Cornetto trilogy for his first film shot in the US. 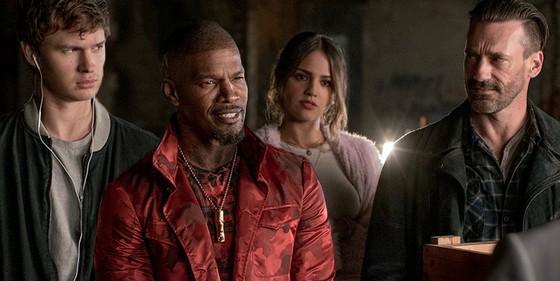 Baby Driver centres around Baby (played by Ansel Elgort), a young getaway driver who, despite his age, is one of the best in the business. He has been stealing cars since he was 12. Due to a childhood accident in which his parents were killed, Baby suffers from tinnitus. To block out the persistent buzzing in his ears he wears earbuds and listens to music. He has an extensive collection of songs. Baby lives with his foster father Joseph (C J Jones), an elderly deaf man who is also wheelchair bound. He hides his loot under the floorboards of their dilapidated apartment in a seedy area of the city.

He works for the manipulative and malevolent Doc (Kevin Spacey), a criminal mastermind who meticulously plans daring bank robberies. Baby owes a debt to Doc and is repaying it through his work as a getaway driver. But when he falls for pretty young waitress Debora (Lily James, from Pride And Prejudice And Zombies) Baby plans to leave this world behind and go straight. Unfortunately, Doc has other ideas, which sets in motion a chain of events.

Doc never uses the same gang twice in a row, so we get a colourful collection of seedy gangster types. These include Jamie Foxx as the violent and unpredictable psychopath Bats. Jon Hamm (Mad Men) is largely cast against type as Buddy, a former nice guy fallen on hard times due his drug addiction. Mexican actress Eiza Gonzalez (from From Dusk To Dawn: The Series) plays Darling, his gun-toting, tough-talking girlfriend; while Jon Bernthal is the enigmatic Griff. Flea, from the rock band Red Hot Chilli Peppers is the wonderfully named Eddie No-nose and Lanny Joon plays JD.

Wright wastes little time in getting straight into the action. Baby Driver features some great, carefully choreographed hyper-paced car chases, which Wright handles with plenty of frenetic energy and imaginative stunt work. Because Baby wears earbuds all the time, music plays an important role in the film. The action is accompanied by a killer soundtrack that features a great selection of music, ranging from one hit wonders Golden Earring through to Queen.

The action has been beautifully edited by Jonathan Amos and Paul Machliss (who worked on Wright’s Scott Pilgrim vs The World), who cut the car chases to the rhythm of the music, and each song perfectly suits the mood of a particular scene. And Bill Pope’s crisp widescreen cinematography is also excellent as he captures the vehicular mayhem from a variety of angles. Wright apparently first conceived of the idea for the film while he was directing the music video for British electronic group Mint Royale. The film actually takes its name from a Simon and Garfunkel song that appeared on their classic 1970 Grammy winning album Bridge Over Troubled Water.

Baby Driver is a little derivative at times. It’s a bit of a throwback to the hard-boiled American crime films of the 70s. It will remind audiences of some of those great car chase films of the era, most notably Walter Hill’s The Driver, which starred Ryan O’Neal and Bruce Dern. There is a great shoot-out sequence during one robbery that mimics a classic scene from Michael Mann’s Heat.

This is a breakout role for Elgort, who has appeared in the Divergent trilogy and the teen weepie The Fault in Our Stars. He brings plenty of charm to his performance here as the damaged Baby. Foxx brings a dangerous edge to his portrayal of the unhinged Bats. Spacey is slick and suave as Doc, but he also brings a hint of menace to his performance. James brings a nice mix of vulnerability and intelligence to her performance as Debora, and her presence tempers the testosterone fuelled action. There is also a palpable chemistry between Elgort and James that adds to the romantic subplot.

Baby Driver demonstrates Wright’s deft command of cinematic language and his understanding of the genre and is, arguably, his best film since Shaun of the Dead.