The House with A Clock in its Walls presents as a magic-carpet ride that goes from charming silly to just plain silly. 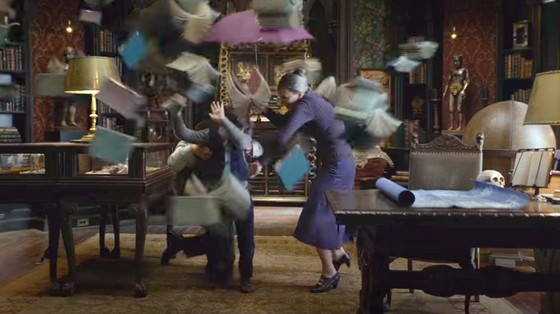 Ten-year-old Lewis (Owen Vaccaro) moves in with his Uncle Jonathan (Jack Black) after being orphaned. He discovers a hidden world of mystery in the curious mansion filled with clocks that is his new home. Lewis isn’t sure who is more astonishing: his oddball Uncle Johnathan or Jonathan’s best friend, verbal sparring partner and neighbour, Mrs Zimmerman (Cate Blanchett).

If adjusting to a new school and new friends aren’t enough to deal with, Lewis’ entire world turns upside down when he discovers his uncle and Mrs Zimmerman are both powerful practitioners of the magic arts. They’re on a secret mission to discover a ticking doomsday clock hidden away somewhere within the house’s walls … and Lewis is in the middle of it.

Eli Roth (Knock Knock) directs from a screenplay by Eric Kripke, based upon a 12-book series by John Bellairs.

The three key characters are adorable and have strong chemistry. Jack Black is ideally suited for his role. He revels in this deliberately over the top nonsense. Cate Blanchett is feisty as his offsider. I loved her role too. The pair’s banter is an undoubted feature of the piece. Youngster Owen Vaccaro is certainly not overawed in their company. I dare say he is having far too much fun.

The house is a veritable treasure trove that I found particularly appealing. Architecturally, it’s stunning. The shenanigans should give 10-year-olds in the audience plenty to enjoy.

After building momentum though, the storyline faltered in the third act. More’s the pity because overall The House with A Clock in it Walls has a joyful and subversive undercurrent.