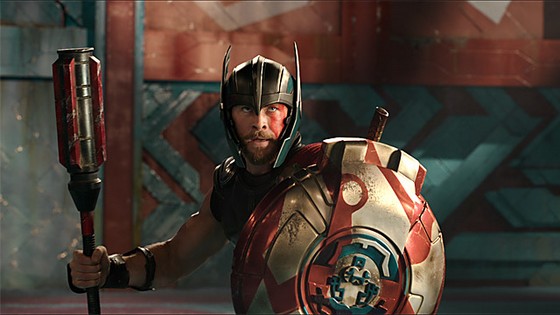 In the story, Thor (Chris Hemsworth) is imprisoned on the other side of the universe without his mighty hammer. He finds himself in a race against time to get back to Asgard to stop the destruction of his home world. The threat comes in the form of his hitherto unknown sister, Hela (Cate Blanchett), known as the Goddess of Death. But first he must survive a gladiatorial contest that pits him against his former ally and fellow Avenger – the Hulk (Mark Ruffalo).

I felt bored quickly, even though Hemsworth is a steady pair of hands for the franchise. There are only so many fighting sequences I can take. They all seem to morph into one.

The best thing about Thor: Ragnarok is the cheeky screenplay. Regular asides breathe life into what is now standard superhero plotting. Without doubt the finest lines in the piece go to Taika Watiti (Hunt for the Wilderpeople), who has a wow of a time as the craggy Korg – and also directs the feature. I got the impression that none of the characters took themselves too seriously. Thank goodness for that.

Chris Hemsworth’s Thor channels Russell Crowe’s gladiator, Cate Blanchett (Carol) is suitably evil and Mark Ruffalo (Spotlight) doesn’t know whether he is coming or going as Bruce Banner/the Incredible Hulk.  I appreciated the brief appearance of Benedict Cumberbatch as Dr Strange. Jeff Goldblum (Jurassic Park) has looks like he’s playing in a panto as an eccentric dictator. Tom Hiddleston (Kong: Skull Island) features as Thor’s brother Loki and Idris Elba (The Mountain Between Us) appears as a psychic.

The palate is colourful, and the big screen is a welcome showcase for set and costume designers.

For all the filmmakers tried to throw at it, very little – if anything – felt fresh. The film turned out to be a long 2 hours 10 minutes. Mind you, comic book fans probably won’t notice and won’t care. They’ll no doubt revel in the showmanship and dissect every little plot point.