Regrets and letting go are the cornerstones of The Midwife. This French drama looks at a fractured relationship between a straitlaced woman and her free-spirited elder. Cesar-winning writer/director Martin Provost’s (Séraphine) film pairs two of French cinema’s most beloved stars, Catherine Deneuve and Catherine Frot. 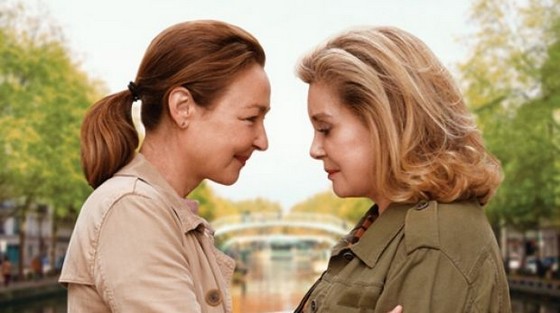 Gifted midwife Claire (Frot) has led a quiet, focused life. She’s dedicated to her profession and to raising her son as a single mother, but change is in the air. The local community maternity ward, where she has worked for decades, is to be closed. Though she has a job offer from a larger corporate clinic, Claire struggles to reconcile their efficiency-driven methods with her own. In the midst of this upheaval, she receives a call from Béatrice (Deneuve), the extravagant mistress of her deceased father. Béatrice wants to meet up again, 30 years after having disappeared without a trace. Béatrice is a true free spirit – loud, vivacious, and seemingly without guilt.

Claire agrees to see her, but is less than enthusiastic about delving into the secrets of the past. She’s certainly not prepared to respond to a plea for help.

Provost says he was saved at birth by a midwife. She gave him her blood and allowed him to live, doing so with discretion and humility. However, The Midwife is not an autobiographical movie. Provost did not want to tell his own story. Rather it was a pretext to go further, to become better acquainted with a profession that has always fascinated him.

The director has made a name for himself by crafting indelible portraits of women. In The Midwife he focuses on depicting women’s strengths and frailties.

I particularly appreciated Frot’s purse-lipped performance. It is a role that has depth and nuance. Here is this highly-strung, closed-minded woman who has spent a lifetime caring for others and bringing life into the world.

At the core of the picture is spirit. That’s what infuses The Midwife with heart and soul, transporting us on an irresistible, if, at times, melancholy journey. As compelling as it is, the film is also overextended – a little too indulgent. Nevertheless, The Midwife has warmth and charm. It will have specific appeal for women of a certain age who appreciate French cinema. It scores a 7 to 7½ out of 10.