Take a ride on the trippy little train that is The Vast of Night and you will think you have been sucked right back into the golden age of science fiction TV. 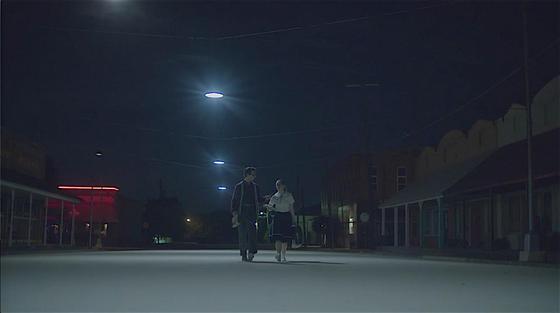 Let us glide across the living room to see what is about to start on the idiot box. Paradox Theater presents for your entertainment, ‘The Vast of Night’.  Lets get closer, closer, and bang there you have it, we are right there inside tonight’s show of mystery and intrigue.

In Cayuga, New Mexico, after Sputnik but still at the very beginning of the dizzy space race years, the whole town gathers for the high school basketball final.  A few pesky varmints have been chewing through the electrical wires in the gym but everyone concerned is hopeful that it’ll all hold and that the players won’t end up slamming hoops in the dark.  High school senior and local radio jockey groovester Everett (Jake Horowitz) is buzzing about, having a quick yak and a laugh on the go with his lady buddy Fay (Sierra McCormick), the local operator for the telephone exchange.  Fay hasn’t yet used her new recorder and Everett joshes her into practicing on the fly before they both head off for their respective shifts.

As Fay bunkers down in front of her switchboard, some of her incoming calls begin to cut out and she is hearing strange sounds of interference also on the radio. Contacting Everett, she plays the sound for him and he quickly puts the sound out over the airwaves, inviting listeners to phone in if they know what the sound might be.  When Billy (Bruce Davis), an ex military man calls in with a curious story about what he thinks the sounds are, the noise of the world falls silent and the screen goes black.

The Vast of Night (and yes, the grammar nerd in me too dies a little each time I type or say the title) is a movie that would have been spectacular for many reasons as a cinematic release, yet absolutely suits being a streaming release also.  You NEED to have that ability to rewind.  Hoo boy, the actors here speak a mile a minute and being as terrified as one should be of missing clues or something otherwise important, you will need to hit that back arrow button more than a couple of times as you watch this intense little film. This is a common complaint about The Vast of Night it seems, that the rapid fire 1950’s banter (which seems satisfying legit) pings back and forth between the two leads like the steel nugget of a pinball machine; a manner that is both charming and extremely irritating at the same time.

Let us not talk too much more about the very simple plot but let us all obsess a little over the directorial choices when it came to scads of predatorial low liers, breathless long tracking sweeps, and intense conspiratorial dialogue that barely needed the second party to be present at all.

In the opening scenes where Fay and Everett are walking briskly away from the school to their night jobs, the camera menaces along behind them, continuing one very long tracking shot, often from low level as if there was a wild animal out there, keen to never let them go entirely from view.

The aerial shots of the town, plus those of Fay running full pelt from one point to the next (claps for doing this sometimes whilst holding a large toddler) make the point that this is indeed a deserted town on this one special night, and if anyone was to be taken, now would be the time do it.

What is also thrilling to note about The Vast of Night is that we don’t see television or movies like this being made anymore.  Yes, there’s the inevitable comparisons to The Twilight Zone and its (lesser) television peers, that’s quite unavoidable, but the making of a film on a budget that needs to be extremely innovative in ways that throw out every possible hook or trick to keep the viewer glued to the screen – these things were of paramount importance back in the day also.  The focused activity, the confessional lighting, the earnest stars pushing onwards to a terrifying discovery – it makes one quite giddy and nostalgic.

It is interesting that the “A” word is not mentioned throughout the whole movie yet clearly we know where this is all going to end up. Or do we?  Director Andrew Patterson has produced a real talk piece of a film that was nominated and won a number of international film awards in 2019, including a win for ‘Best Narrative Feature’ at the Slamdance Film Festival.

The Vast of Night is able to be viewed now on Amazon Prime.