Sometimes the best piece of advice you can give about a new TV series is to just stick with it.  Most find their groove eventually and in speculative shows like Upload, there’s a whole world and a lot of rules that need to be established before we can completely buy into its new concepts. 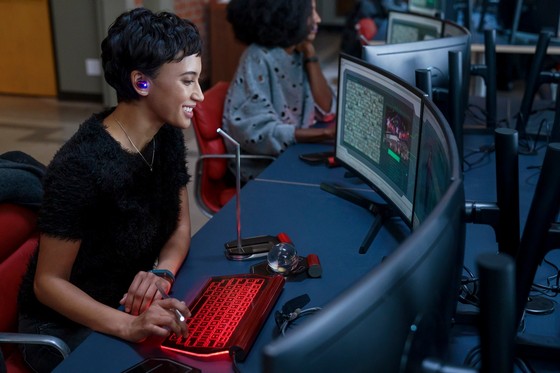 The construct of Upload is simple enough; man dies, man is uploaded to a virtual world, man falls for his handler who manages his concerns from her job in the real world.  Secondary to this, we have a mystery behind the circumstances of the death.

Nathan Brown (Robbie Amell) leaves behind a life that was just beginning to get interesting.  In business with his best friend, Nathan was about to set the world on fire with a promising new start up that would help to level the playing field for anyone contemplating the end of their existence as a carbon based life form.  Nathan’s girlfriend Ingrid (Allegra Edwards) may have been getting a little clingy, but she was still hands downs the most gorgeous woman that various surgical enhancements could ever help to create.  It is Ingrid that holds the key to his forever after now, telling Nathan after his car crash that he can either go into surgery – and possibly snuff out of permanent existence – or upload.  His consciousness can live on in a gorgeous virtual community full of dead people and helpful artificial intelligence beings, or he can just *poof* cease to be.

In the Disney bright privileged resort world of Lakeview, Nathan slowly begins to figure out what he can and can’t do.  With every additional choice costing additional coin, it irks Nathan that Ingrid is his account holder and in ultimate control of just how much currency he has to spend.  It raises a few flags for Nathan also to realize that chunks of his memory seem to be missing and that his former business partner will not take his calls from the afterlife.  The beacon of hope in Nathan’s new existence is Nora (Andy Allo), his ‘angel’, still in the real world and crossing all the boundaries her farcical workplace has in place to stop angels from getting too close to their dependent clients.

The afterlife worlds are either cheaply built slideshows of horror or comfortable heavens, depending on how much money you have to throw at them. Upload has some truly alarming moments that come out of nowhere – one notable screamer in the pilot – and these help to keep things sharp when it all gets a bit soap operaish.  Upload is a very modern version of black comedy that flies uncomfortably close to perhaps what we can conceivably see occurring at some point in our common futures (Upload is set in 2033).   It does bang the viewer thematically about the head a bit with the overt ‘be careful what you wish for’ inclusions, however never gets so righteous that it loses its superbly sarcastic appeal.

The supporting characters of Upload have better comedic lines, to be truthful, than the two leads do.  Nora’s co-workers are all hysterical, and the other uploaded people Nathan now lives with all have a host of after life worries that compete superbly with everything the living still have to navigate.

Upload has some savage things to say about humans and the created world of Lakeview is there to prove why we can’t have nice things. The take home is that our future life is possibly going to be as bleak as its present, and when you get to the after life, that won’t all be roses and unicorns either, despite how fabulous it may have looked in the brochure.  Cheerful, no?  Perhaps not, but its terrific fun to watch it all devolve in this unique and sharply written new series.

Upload is executive produced by Jeff Daniels, who most notably produced the US version of The Office.

Upload season one is now streaming in its entirety on Amazon Prime.  Upload has been renewed for a second season.