There’s a fine line with fantasy that can, and often does, cross the line of credibility. A Wrinkle in Time absolutely smashes it.

Meg Murry (Storm Reid) is a typical middle-school student. Struggling with issues of self-worth, she just wants to fit in. The daughter of two world-renowned physicists, she’s intelligent and uniquely gifted. So is her younger brother, Charles Wallace (Deric McCabe), but Meg has yet to realise it for herself. But the mysterious disappearance of her father four years earlier has left Meg devastated and her mother heartbroken. While friends urge her to move on, Meg still believes he’s still alive. 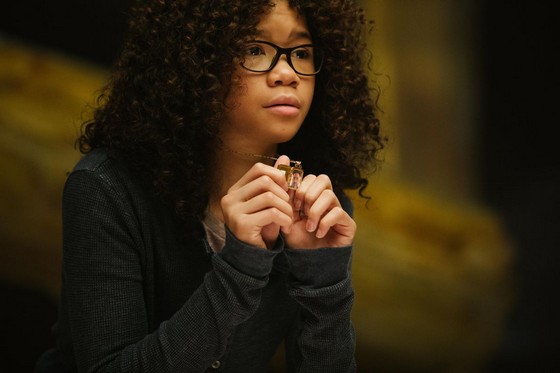 Before he vanished, Mr Murry was tracking events in the cosmos when he discovered “tessering” – a wrinkle in time and space through which intergalactic travel is possible. But it’s still an unproven theory, and the scientific community regards it with scepticism.

One night, Charles, Meg and a fellow classmate, Calvin (Levi Miller), meet three otherworldly visitors who have travelled to Earth with an important message for Meg. Her father’s discovery is, in fact, an extraordinary accomplishment. But a darkness has infiltrated the universe and he is now in grave danger.

Together they set off in search of Mr Murry with Mrs Which (Oprah Winfrey), Mrs Who (Mindy Kaling) and Mrs Whatsit (Reese Witherspoon) as their guides, tessering to worlds beyond their imagination and confronting the powerful, evil energy face-to-face. But in order to save her father, Meg must first overcome her own flaws and insecurities. She has to harness the strength necessary to defeat the darkness … and it’s a journey she has to take on her own.

Ava DuVernay directs A Wrinkle in Time from a screenplay by Jennifer Lee and Jeff Stockwell. It’s based on the YA novel of the same name by Madeleine L’Engle. The book was first published in 1962. It’s now available in 35 languages, having sold millions of copies.

The set-up was the only element of the movie I found compelling. The rest was mealy-mouthed platitudes.

I quite liked Storm Reid as Meg, while Reese Witherspoon’s comic turn is a winner; but the script is lame and its execution lamentable. Oprah Winfrey’s utterances often appeared forced and her facial war paint was ridiculous.

The good versus evil storyline is clearly aimed at eight to 12-year-olds. Traditional fairy tales have far more value and can often resonate with older audiences too. This does not. Look elsewhere because A Wrinkle in Time is an ordeal to sit through and to have to try to swallow.