Late Night pokes fun at a flawed TV talk show host who’s been sacked after a decade of plummeting ratings.

After almost 30 years on the box, legendary entertainer Katherine Newberry (Emma Thompson) – a pioneer in her field – is losing her touch. She dismisses contemporary guests in favour of those who are rock solid, old school and have some intellectual rigour. She chooses to play it safe. Newberry is also ruthless and treats her all-male writing team – some of whom haven’t even met her – with contempt. Her whole approach displeases the network head, who tells her this will be her last season. 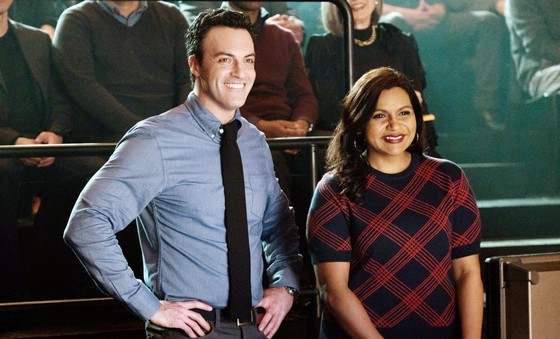 Eventually, Newberry discovers she will be replaced by a younger, edgier male. But she isn’t about to give in without a fight. She’s impulsively hired a woman, Molly Patel (Mindy Kaling), to join her team of writers. But Molly has no television experience and previously worked as a chemical plant efficiency expert. The sparks continue to fly as a secret from Newberry’s recent past comes back to haunt her.

Much like the Newberry character, Mindy Kaling is something of an entertainment industry innovator. She was the first woman and first person of colour to write for the TV hit sitcom The Office. She then created and starred in her own show, The Mindy Project, and penned two best-selling books. Now, the creative dynamo has channelled her own career experiences into her first feature screenplay. Kaling’s writing is spot-on.

The acting is exceedingly strong from the two leads, who are ably supported by the other players. Emma Thompson delivers another virtuoso performance and Kaling is the perfect counterpoint. The pair work together and bounce off each other effortlessly. John Lithgow adds a quiet dignity as Newberry’s ailing husband.

I really liked the mix of humour and pathos. It ticked all the right boxes. Importantly, I quickly invested in the characters and their journey. This is a movie born of the #MeToo generation … and political correctness gets a going over. It also makes a statement about the vacuous and the substantial, and what is regarded as entertainment.

Late Night is one of those movies that I walked out of with a nod of approval. I felt like I had seen something fresh.