What do you do when the cards you’ve been dealt aren’t enough? In Jessie Cates’ (Esther van Doornum) case, she calmly takes the ultimate step.

Jessie is the single mother of a troubled child, who has left. She lives with her own widowed mother Thelma (Caroline Lee). She tells Thelma she’s about to take her own life and there’s nothing she can do to stop her. Her mother gets upset and tells her daughter she needs her. In her final few hours, Jessie ensures everything in the kitchen is in its place. She’s prepared a list of gifts for 20 years hence and determined who would receive what from what little she has. Her mind is clear.

She has been through the mill, having had convulsions since the age of five, been in a broken marriage and is fundamentally unemployable. So, heartache and suffering are laid bare. She has had no joy in her life and even though her epilepsy has settled down of late there is nothing she has to look forward to. Even moving in with her mother after her husband left her has been a mistake. Jessie has thought about suicide for 10 years. Now she’s ready to act. 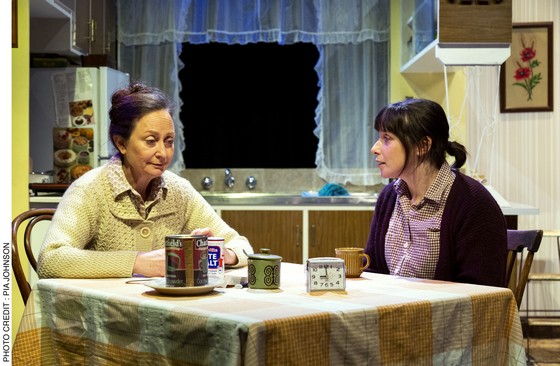 Written by American playwright Marsha Norman in 1981, ‘night, Mother is a searing portrait of despair. It received the Pulitzer Prize for Drama in 1983 and was nominated for four Tony Awards, including Best Play. Sissy Spacek and Anne Bancroft starred in the Golden Globe-nominated film of the same name in 1986. Now Esther van Doornum and Caroline Lee bring to life the plight of this forlorn woman, who is not willing to carry on.

The pair don’t miss a beat in the verbiage-dense play. They’re entirely credible. Their respective characters’ vulnerabilities and peccadilloes are evident. I sat there willing Jessie to find a viable alternative, knowing all too well that that can’t happen. I reflected on the importance of human connection in an increasingly disconnected world, which has more people in it, but also more isolation and resentment. The act of caring for someone or something is part of the equation, but so too having a purpose, something to aim for and anticipate.

Skilfully directed by Briony Dunn, ‘night, Mother makes you think and feel. Thirty-five plus years’ on, Marsha Norman’s narrative has lost none of its impact. Iron Lung Theatre’s production is playing at Chapel off Chapel until 17 August 2019.