One of Bryan Brown’s early films was 1980’s Palm Beach, a low budget surfing movie set on the idyllic beaches of northern NSW. Nearly forty years on Brown returns to that eponymous location for this drama about a gathering that can be called The Big Chill – Australian Style. Secrets and lies, personal failings, regrets and simmering resentments from the past will resurface.
Brown plays Frank, who is about to celebrate his 73rd birthday. He has invited family and friends to his beachside house, which overlooks a stunning coastal vista, to celebrate the occasion. In the 70s Frank managed a band called The Pacific Sideburns who had a big hit with their only single, a song called “Fearless” (which was written especially for the film by James Reyne, formerly of Australian Crawl). Since then the band members have gone their own way, although they have remained friends. 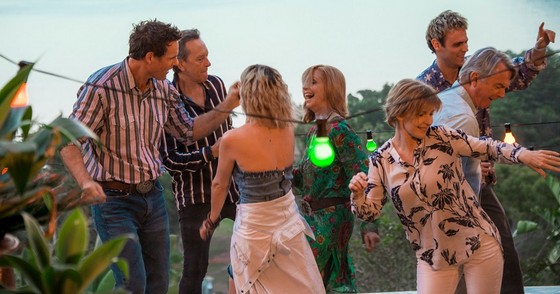 Frank ran a successful sporting good company, which he sold for huge profit, and has grown bored and feels unfulfilled and at a loose end. His best friend Leo (Sam Neill) arrives with his second wife Bridget (Jacqueline McKenzie) and stepdaughter. Leo has recently survived a cancer scare, and now wants to learn the truth about Frank’s son Dan (Charlie Vickery). Twenty year ago Leo had an affair with Frank’s wife Charlotte (Greta Scacchi), but the three agreed to remain quiet about it. Leo’s demand for a DNA test to resolve the paternity issue casts a bit of a pall over the weekend. The irresponsible Billy (Richard E Grant) now works as an advertising copywriter. His two friends are appalled to learn that he has used their only hit song, without permission, as the theme for a commercial about adult diapers. Billy’s wife, aging actress Eva (Heather Mitchell) agonises over whether to accept a role playing Nicole Kidman’s mother in a big budget feature and become typecast as a grandmother.

Palm Beach is the sophomore feature for actor turned director Rachel Ward, and is lighter in tone than her debut feature Beautiful Kate, an abrasive drama about dysfunctional families and incest. Palm Beach was loosely inspired by a vacation that War and her husband Brown took a few years ago, and found that the holiday raised some old personal issues and tensions.
The script has been written by Ward and Joanna Murray-Smith, one of Australia’s foremost playwrights. Multiple subplots are woven throughout the central narrative, but many scenes do seem to be too theatrical and static in nature. Palm Beach explores themes of family, friendship, aging, and offers little that we haven’t seen before in many other films of a similar nature. The whole thing lacks a sense of urgency and intense drama until the final act, and I, frankly, s a bit dull.

Ward’s direction is laid-back and unhurried, and allows us to immerse ourselves in the dynamics of this gathering. Ward has assembled a great ensemble cast to bring the characters to life, and performances across the board are uniformly good.

Brown and Neill have been friends for a long time, and have worked together on five films including most recently Warwick Thornton’s award winning Sweet Country. And they have a great easy going rapport. Grant, who was so memorable with his scene stealing performance in Can You Ever Forgive Me? is largely unlikeable as Billy. Scacchi gets a couple of emotional scenes that allow her to briefly shine.

The film looks beautiful thanks to the warm, sun-kissed cinematography of Bonnie Elliott (Undertow) who captures the stunning scenery and setting. There is also some great production design from Melinda Doring (Moulin Rouge!). Palm Beach features a great soundtrack of classic 60s and 70s rock, and there is a great score composed by Melbourne’s Teskey Brothers.

It seems as though the cast had a lot of fun working on the film. We wait to see whether audiences will have as much fun watching Palm Beach.