Between them, the husband and wife team of writer/director Nancy Meyers and director/producer Charles Shyer produced many of the popular but formulaic romantic comedies of the 80s and 90s Films like Baby Boom, the remake of Father of the Bride, and The Intern – many of which starred Diane Keaton. Now their daughter Hallie Meyers-Shyer has made her feature film debut with Home Again, a romantic comedy that adheres to the template established by her parents.

An unlikely situation provides the set-up for this amiable rom-com. The star of the show is the always-perky Reese Witherspoon, an actress who has delivered some strong dramatic roles but has also shone in the occasional comedy like Legally Blonde. A good actress who is always watchable, she nonetheless deserves better than this light weight piece of fluff. 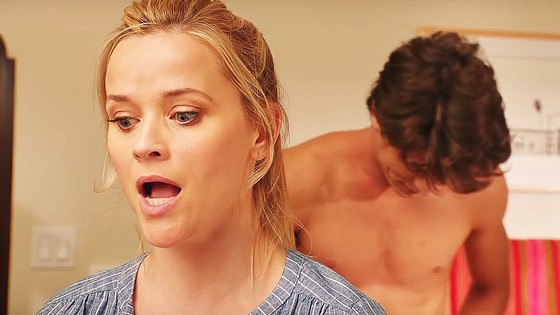 Witherspoon plays Alice Kinney, the daughter of the late John Kinney, a famous and revered 70s film director. On the eve of her 40th birthday, she’s undergoing a bit of a midlife crisis. Newly single, she has just moved back into her father’s luxurious home in the Hollywood hills where she tries to raise her two daughters – Rosie (Eden Grace Redfield) and Isabel (Lola Flanery). She is separated from her husband Austen (Michael Sheen), a record producer who is based on the other side of the country in New York.

While out celebrating her 40th birthday with friends in a bar, she meets three hunky twenty-something aspiring filmmakers. They are director Harry (the drop-dead hunky Pico Alexander), actor Terry (Nat Wolff) and screenwriter George (Jay Rudnitsky). The trio are broke and desperate. They’re trying to find financial backing for their debut feature, but are unwilling to compromise their artistic integrity. They all party into the night and the guys end up crashing at Alice’s house.

The next morning, Alice’s mother Lillian (Candice Bergen) convinces Alice to let them stay at her guest house for a week while they sort themselves out. George is a big fan of Alice’s father and his work. Terry and George make themselves comfortable in the guest house, and Harry shares Alice’s bed. Harry’s fling with Alice helps them both to grow up a little and move on with their lives.

The three become perfect models of men around the house. They fix broken furniture and make time for Alice’s kids, something Austen apparently never really had time for. But tensions arise among the three as they wait for their project to take off. Austen’s unexpected return home after learning about the presence of the three young men upsets the domestic bliss. Austen hopes to repair their broken relationship, but Harry, Terry and George have other ideas.

The sub-plot concerning the boys’ efforts to find funding for their project offers a subtle critique of the Hollywood system and the development hell that many film ideas go through.

Some of the choices Alice makes throughout the film are simply not credible. It’s hard to see why an actress as intelligent as Witherspoon would be drawn to such a character. However, she has a warm and likeable presence. But there’s little real chemistry between her and Alexander. Of the three aspiring filmmakers, George comes across as the most well-rounded and sympathetic character. Bergen is given little to do as Alice’s mother, but she has a strong screen presence. Some carefully edited archival footage of the actress from her early career reminds us of what a screen beauty she was. Sheen’s Austen is little more than a stereotype, but he tries hard with an underdeveloped character.

Home Again is a rom-com aimed at adult audiences. The story, written by Meyers-Shyer, is a little manipulative and contrived at times, and the central scenario is a little unbelievable. It is also a bit of fantasy fulfillment as the older woman gets to bed a handsome younger man here, thus inverting one of the tropes of the genre. It has a brief running time of only 97 minutes, although there are a few slow patches that pad it out.