Movies about music have had a rough trot recently. From the sugary Trolls: World Tour to the super-serious Echo in the Canyon, for me at least, few have inspired (except maybe Bill & Ted Face the Music). Now director Nisha Gantara (Late Night) dives into a music industry fantasy/rom-com with The High Note. But the result is still largely uninspiring.

Gantara directs from a debut screenplay by Flora Greeson. And the plot has something of the feel of a first-time writer. The film looks at the world through such rose-coloured glasses, it can’t see its own disconnection from reality. Indeed, late in the film, one character chides another for ignoring the hard issues around a situation. But despite this apparent revelation, The High Note barrels blithely along with its own sunny daydream until its final clumsy twist. 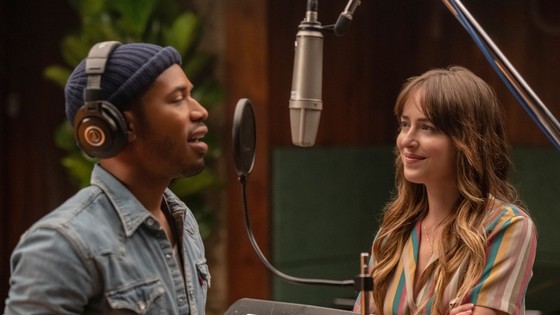 The hero of this Cinderella story is Maggie Sherwoode (Dakota Johnson). She’s the assistant to legendary R&B singer Grace Davis (Tracee Ellis Ross) – the evil stepmother in this scenario. In case you hadn’t guessed, Grace is a bit of a diva and – perhaps unwittingly – makes Maggie’s life unnecessarily difficult. But Maggie – bless her cotton socks – has big dreams of becoming a music producer. So despite working long days for Grace, she’s staying up all night listening to classic vinyl and remixing an as-yet unreleased Grace Davis live album. Grace herself is stuck in a rut. She has to decide between a lucrative Las Vegas residency – an idea pushed hard by her manager Jack Robertson (Ice Cube) – and a risky album of new material.

Maggie meets her Prince Charming in the form of David Cliff (Kelvin Harrison Jr). He’s apparently independently wealthy, but spends his time doing gigs at Laurel Canyon grocery stores. Maggie of course sees David for the superstar he hopes to be, and decides to make him pop royalty by producing a record for him, and becoming his girlfriend. But as you might have guessed by now, the course of true love – and music industry stardom – seldom runs smooth and Maggie soon finds that her vision isn’t necessarily what either Grace or David really want (spoiler – until they do).

From the lovingly constructed shots of L.A.’s Capitol Building at golden hour, to Maggie’s encyclopedic knowledge of ’60s R&B, the film is pure make-believe. Its connection with reality is tenuous at best. That translates into some major problems in the third act, which is basically held together with sticky tape. Gantara also could have been more ruthless in the editing suite. The script loses steam long before the film’s nearly two-hours runtime is done. And despite its obvious fairy-tale trappings, the film feels the need to lecture the audience about what “real” music should be. Not a great look when the performances seem to be autotuned to the max.

The High Note invites obvious comparisons with The Devil Wears Prada. But despite the latter film’s obvious incongruities, I found its take on fashion far more believable than this film’s take on music.

Dakota Johnson (Suspiria) brings a bouncy energy to the character of Maggie that’s quite endearing. I’m still not sure she can really “carry” a film, but she certainly gives it her all here. The character of Grace is an obvious cipher for the legendary Diana Ross. So Gantara’s casting of her daughter Tracee Ellis Ross (Black-ish) is a coup. Ross certainly channels her famous mother, giving the film at least a hint of credibility.  Kelvin Harrison Jr (It Comes at Night) is suitably suave as David; but the script largely sidelines Zoe Chao (Where’d You Go Bernadette) and Bill Pullman (Dark Waters) in smaller roles. Real-life music producer Diplo pops up in a self-deprecating cameo that’s possibly the highlight of the whole film.

The High Note ultimately felt “flat” for me. Admittedly, I’m not a huge fan of the style of music it showcases; so if you are, you’ll probably get a lot more out of it. If you want to see how the music industry really works, this is not the film for you. But if you’re looking for a sunny fantasy with a neatly packaged Hollywood ending, this will be right up your alley.