Once upon a time, there was just music. Now the music scene has devolved into so many genres and sub-genres (avant-garde Norwegian deep trance, anyone?), it’s hard to keep up. Echo in the Canyon is a well-made but niche documentary about one of these sub-genres – specifically the Laurel Canyon sound of the 1960s.

To call the Laurel Canyon sound “niche” might even be an overstatement. As the doco itself acknowledges, it lasted for 3 years (tops) between 1964 and 1967. Still, it produced some seminal groups like The Byrds and Buffalo Springfield; and recordings like The Beach Boys’ Pet Sounds. I suspect anyone who grew up in the 1970s and ’80s will probably be familiar with at least some of the music featured, if only because it’s featured in a lot of TV shows and movies over the years. Millennials however may struggle to identify with it. 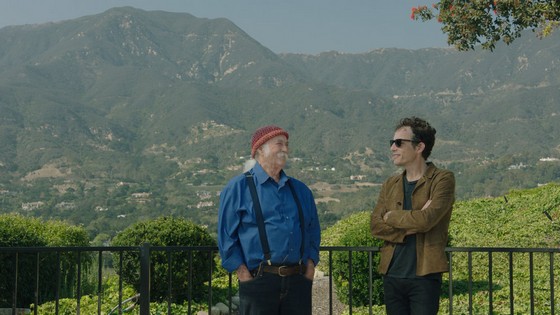 The basic structure of the film revolves around Jakob Dylan (yes, Bob Dylan’s son). He stages a concert highlighting the Laurel Canyon scene, with several contemporary stars like Beck and Fiona Apple contributing (recorded in LA during 2015). The concert footage is intercut with Dylan interviewing protagonists of the scene. They include David Crosby, Michelle Phillips and Neil Young; as well as “fellow travellers” such as Eric Clapton and Ringo Starr.

This structure minimises the need for a lot of “talking heads”; but it also highlights how thin the material is. At least half the film (which only runs for 82 minutes) is either whole songs from the concert, or footage of Dylan and others in the recording studio. A couple of scenes feature Dylan and others sitting around in a lounge room talking about records. And archival footage provides a sense of immediacy. So the insights from those who were actually there (relayed via interview) are rather sparse. As a chronicle of a time and place, it needed more from them. I did however like that many of those segments were filmed outdoors. Crosby, for example, talks with Dylan on a terrace with a magnificent backdrop over the Hollywood Hills (see above).

Director Andrew Slater (a former music industry bigwig with Capitol Records) steers Echo in the Canyon uncomfortably close to being a closed loop. The film plays out almost as if the whole history of music before 1964 doesn’t exist; and that it then stopped in 1967. It becomes so wrapped up in its own importance, Slater doesn’t even realise how ludicrous some of its claims are. For example, the film posits that The Byrds were the first to make “a song of poetic depth and grace” a hit. Really? Never heard of “Strange Fruit”? One interviewee states that Brian Wilson of the Beach Boys is “more influential than Mozart”; which is a bit like saying Stan Lee is more influential than Shakespeare. I mean, Wilson is a bona fide hitmaker, but come on.

More damning though is Slater’s failure to put the Laurel Canyon scene into any kind of social context. Despite the social revolution going on in the 1960s, it barely rates a mention. The struggle for civil rights, the Vietnam War, and the rise of feminism might as well never have happened so far as the film is concerned. It briefly mentions to the influence of folk music at the beginning, and the rise of psychedelic rock at the end, but that’s it. Other popular culture from the era (with the exception of Jacques Demy’s film Model Shop – which weirdly doesn’t feature any of the music used in this doco) is similarly ignored. As a document of the times, Tarantino’s Once Upon a Time… in Hollywood does a much better job – and it’s fiction!

Jakob Dylan makes for a fairly dour presenter. It’s clear he knows his stuff and is serious about this music, but he rarely even breaks into a smile. I think he makes one joke in the whole film – it’s a pretty good joke, but still slim pickings. Many of the interviewees outshine him, notably the prickly Crosby and the still-effervescent Michelle Phillips.

Echo in the Canyon ends up being just that – an echo, a faint reverberation of something greater. The film fawns on its subject without contextualising – much less challenging – it. Sure, come for the music, but don’t expect any great insights.