As the adults in the Welsh village of Glyngolau dutifully either trudge and jog around the countryside in a community fun run, there is an explosion nearby. As all converge on the site of a construction project, the group begin frantically calling their family members to let them know what has occurred. The Accident details what comes next for a small community that has just lost nine of its children. 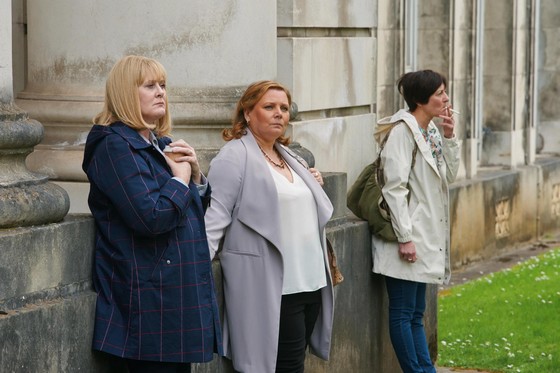 Polly Bevan (Sarah Lancashire) is the village hairdresser and married to local counsellor Iwan (Mark Lewis).  The Bevan’s rebellious fifteen year old daughter Leona (Jane Groot) is the only child survivor of the initial explosion, and also of the secondary collapse of the structure. It is Polly who is filmed screaming her accusations at the corporate representative, and it is husband Iwan who is humiliated by her actions.

As the blame game rolls on in The Accident, the accusing eyes of the town are directed at all the stakeholders for the project (annoyingly, it is never clarified as to what the purpose of the building project is) and next directed at those that were present at the scene. Polly initially supports the efforts of the other parents to secure a conviction of negligence, however the increasing toll of looking after her now paraplegic child and her alcoholic husband finally makes her begin to buckle.

The real life incident of Grenfell (British tower fire) is referenced in The Accident, as are many other real life mass disasters that were attributable to dodgy builders and corners being cut during large scale construction projects.

It is always a joy to see Sarah Lancashire on the small screen, as those of you who inhaled The Last Tango to Halifax and Happy Valley in recent years would already know.  But there is very little joy to be had in watching The Accident.  This is bleak, weighted drama that piles on more and more suffering as incrementally we are made aware of fractures that existed in the grieving families before the explosion ever happened.

The Accident is a constant surprise in the first half, but struggles to keep the momentum in the latter two episodes once all the relationship dynamcis have been established.  Lancashire’s performance is a powerhouse of both strength and vulnerability conveyed in many small gestures and it is her work that carries the show.

This is a busy but short series so secondary interesting plot threads such as a power imbalance in a corporate romance, and the power imbalance in Polly’s marriage are never however fully explored to the viewer’s satisfaction.  The clumsy scenes of corporate bigwigs are a little cringeworthy, with the only interesting flip here being that it is a female project director being hung out to dry by her peers instead of the stereotypical stuffed white male Brit in a suit (though there’s some of those here too).

The Accident is a four part series streaming now in its entirety on ABC iView.  The Accident originally screened in 2019 in the United Kingdom and was filmed on location in beautiful South Wales.  (Both the story and town however featured in The Accident are fictional).