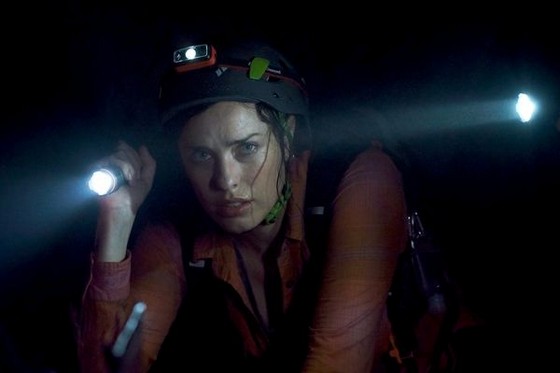 Five people set out on an adventure to explore the caves, which aren’t on any tourist map. Outside, a tropical storm is closing in. Once the group have rappelled into the depths, they’re caught in a torrent. The rising water threatens to drown them, so they have to find a way out. But all possible entrances now appear to be blocked. And they have an inconvenient man-eater to deal with, which – of course – they didn’t know was there.

We’ve seen this sort of thing many times before. It follows a pattern. You start with a certain number of people caught unaware, and over time the creature or creatures picks them off one by one. Some features along these lines are more compelling than others. This is one of the latter, with several flat patches where very little happens.

The characters have highly manufactured back stories. Jen (Jessica McNamee) doesn’t trust her he-man partner Eric (Luke Mitchell), so there is trouble between them. Her friend, Yolanda (Amali Golden), hasn’t told her man, Viktor (Benjamin Hoetjes) – who is in remission from cancer – that she’s pregnant. And Cash (Anthony J Sharpe) searched for a pair of missing Japanese tourists in the area but didn’t find them.

The trick with this sort of horror-thriller is to keep up the tension and to build an affinity for the characters with the audience. On both those scores I felt let down. Black Water: Abyss is the sequel to the 2007 cult film Black Water. Both films were directed by Andrew Traucki. Try as the writers – Ian John Ridley and Sarah Smith – did, there simply wasn’t enough in this film, save for an unexpected twist near the end. I wanted more surprises but the film well and truly signalled its punches. I didn’t care enough about the fate of the characters. I did note some stunning outdoor cinematography from Damien Beebe. Mind you, most of the movie is set below ground. At least one of the actors overacted.

Still, there’s always been an audience for this kind of fare. Jaws set a high benchmark, which others simply aspire to. If you don’t get the chance to see Black Water: Abyss in the cinema, it will be released on digital platforms on 23 September 2020.