A disturbing and unsettling drama about madness, toxic masculinity and unhealthy obsession, Deerskin (aka Le Daim) is the latest film from French electronic musician turned filmmaker Quentin Dupieux. His absurdist films have always done well on the festival circuit, and this oddball drama again explores some of his usual themes.

Georges (played by Oscar winner Jean Dujardin) is a middle-aged divorcee who we first meet driving through the countryside towards a remote Alpine village. He flushes his coat down the toilet of a roadside garage and then buys a deerskin coat from a local man (Albert Delpy), who also throws in a digital camera. Passing himself off as a filmmaker Georges settles into a hotel in a small sleepy village. But Georges is obsessed with the “killer style” of his suede deerskin coat, often admitting wearing it in mirrors and filming himself. He also carries on conversations with his jacket. He also becomes obsessed with becoming the only person wearing a jacket for some inexplicable reason. He begins a process of stripping people of their jackets and filming these encounters. 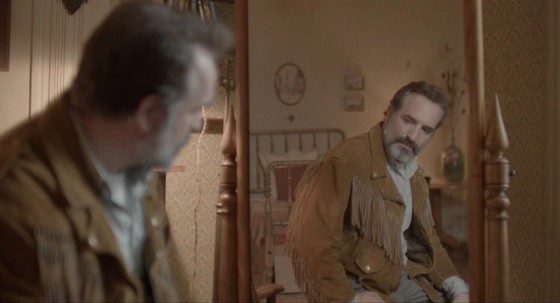 At a bar meets Denise (Adèle Haenel) who professes an interest in a career as a film editor (she once re-edited Pulp Fiction on her own computer, rearranging the scenes in order). Georges hires her to work on his project. He says that the rest of his crew are filming important scenes in Siberia. He becomes increasingly desperate as he also runs out of money and his ex-wife appears to have blocked access to his bank account. His lies grow more outlandish. Georges’ actions grow more bizarre and increasingly violent. But is the jacket somehow possessing Georges or has it just allowed his inner nature to emerge?

Deerskin is a quirky film with an unexpectedly light touch given the material, and it often doesn’t make logical sense. Audiences are often kept off balance throughout and are never quite sure where the film is headed. There is some gorgeous cinematography of the local region from Dupieux, who also employs handheld camera to good effect. He also imbues the material with a growing sense of dread as Georges’ obsession descends into something else, with a washed-out colour palette. An eerie score from Janko Nilovic adds another discordant sinister note to the bizarre material.

Georges is sociopathic and possibly schizophrenic; an unsympathetic protagonist. This is a change of pace for Dujardin (The Artist), who is better known for his comedic roles, particularly the pompous and bumbling secret agent in the OSS117 series of action comedies. He still manages to suffuse Georges with a deceptive charm in a minimalist performance. He anchors the bizarre premise. Haenel (Portrait of a Lady on Fire) brings a tough edge to her performance as the initially naïve Denise who becomes his willing accomplice, encouraging his verité filmmaking. There is strong chemistry between the pair that drives the film along.

Deerskin will appeal to audiences looking for something out mainstream cinema. Deerskin is a low-key oddball thriller but is also arguably Dupieux’s most accessible film to date. It has been seen by some as an allegory of the filmmaking process, while the subtext also cautions us about looking beneath the surface for something that isn’t there. Dupieux seems to have grown in confidence as a filmmaker since his debut a decade ago. At a rather brief 77 minutes it gets its ideas across quickly and never quite outstays its bonkers premise.