Feeling and sensitivity pervade every fibre of the sensual and artistic work by French auteur Céline Sciamma (Girlhood). We’re in Brittany, France in 1760. Slow-moving but compelling, Portrait of a Lady on Fire concerns a secretive and developing relationship between a painter, Marianne (Noémie Merlant) and her subject, Héloïse, (Adèle Haenel), who has just left a convent. 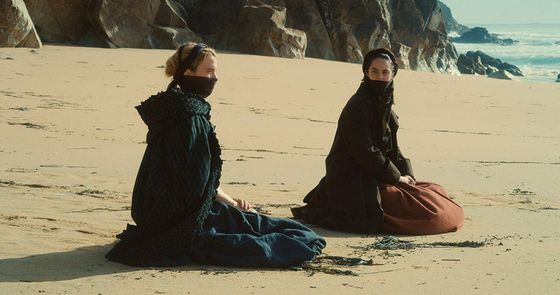 The story unfolds in flashback as art teacher Marianne poses in front of her students, transported back in time by a piece she painted years ago that a pupil finds and displays. It was when Marianne was commissioned to produce a wedding portrait of Héloïse, who her mother, the countess (Valeria Golino), was about to marry off to an Italian.

But the rules of engagement were different to most commissions. Because Héloïse was a reluctant bride, Marianne had to paint her without Héloïse knowing. Marianne observed her by day and secretly painted her at night.

Intimacy and attraction grew between the two women as they shared Héloïse’s first and last moments of freedom, all while Marianne was painting the portrait that would end it all. Each of the main players – including Marianne, Héloïse, the countess and the household maid Sophie (Luana Bajrami), who has her own issues – is excellent, with the focus squarely on the leading pair.

Both are, at first, circumspect before allowing their feelings to bubble over much later in the piece. There is a great deal of merit in many aspects of this production, starting with its slow-burn narrative structure. The cinematography, including the framing of shots by director of photography Claire Mathon brings out the most in the subjects.

Then there’s the costuming and period detail to take us to the heart of the action. There’s a lyrical and poetic quality to what we are seeing. The picture has an allure from the get-go, which goes far beyond the dialogue, which, in turn, is kept to a minimum. Written and directed by Sciamma, she has crafted something mighty special.

Art-house in nature, Portrait of a Lady on Fire has a lightness of touch that should appeal to cinephiles.  Rated M.