Francis Lee follows up his well-received debut feature, God’s Own Country (2017), by mixing fact and fiction in Ammonite*. This finely constructed drama explores a real-life relationship, but takes it in directions not necessarily supported by the historical record.

As in God’s Own Country, Ammonite delves into a same-sex relationship in a somewhat remote location. Here though he abandons the Yorkshire dales and heads to the south coast of England, specifically the town of Lyme Regis. His protagonists are two real women who both performed pioneering work in the then-nascent field of paleontology in the 19th Century. But while the exploits of these women are well-known, Lee doesn’t really dwell on their scientific achievements. Instead, he constructs an austere romance that will almost certainly divide audiences. 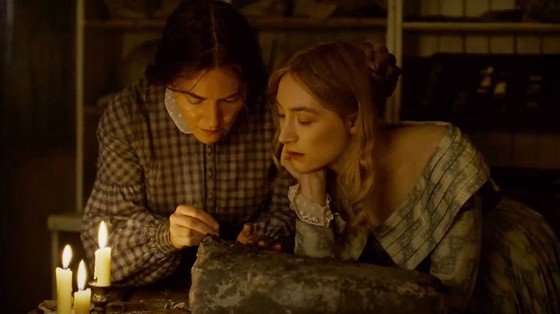 The women are Mary Anning (Kate Winslet) and Charlotte Murchison (Saoirse Ronan). It’s the 1840s, and Anning has built something of a reputation as a finder of fossils. It’s not just her keen eye – the meticulous work she puts into presenting the specimens make them attractive to collectors. Those collectors include the British Museum, which has purchased a full ichthyosaur fossil she found. But being a woman, she’s excluded from the scientific “boys club” of the time. She finds an admirer however in Roderick Murchison (James McArdle).

The enthusiastic amateur is about to undertake a European tour to hunt for fossils, and wants Mary to teach him what she knows. He pompously assumes it will take all of a couple of days. For her part, Mary isn’t too keen on showing this fancy Londoner her skills. But he offers ample payment; money Mary needs to care for her sickly mother Molly (Gemma Jones).

Charlotte meanwhile has been diagnosed with “melancholia”, and her doctors have prescribed rest and “sea air”. So with Roderick on his way to Europe, Charlotte stays on in Lyme at a hotel. But she takes an ill-advised dip in the chilly ocean. A day later, she knocks on Mary’s door suffering a raging fever. The local physician Dr Lieberson (Alec Secareanu) advises against moving her. So the already pressured Mary finds herself caring for another “invalid”. A salve purchased from chemist Elizabeth Philpot (Fiona Shaw) seems to work wonders, and Charlotte is soon on her feet. Mindful of her doctors’ advice, she resumes “taking the sea air” by accompanying Mary on her fossil excursions. Slowly, a warmth grows between the two women.

Mary Anning is a giant in the field of paleontology. So Lee’s choice to largely gloss over her scientific work in favour of the romantic story is a controversial choice in itself. I mean, you wouldn’t make a film about say Amelia Earhart but basically ignore the flying. No doubt he’s contrasting the calm reasoning needed for science with the unpredictable emotions of desire. But Anning and Charlotte Murchison were pioneers in their field and arguably deserve to be recognised as such. Sticklers for historical accuracy (which I’m not) will also be horrified by how far Lee’s speculation strays from known facts. Without going into it too much, Anning and Murchsion were definitely friends. But as I understand it, little evidence exists for anything beyond that.

Lee adopts a cool, almost detached, style. It’s one of those things you either love or hate. I happen to quite like it, but it’s definitely an acquired taste. Both his script and his style invite (indeed, almost demand) comparisons with Céline Sciamma’s excellent Portrait of a Lady on Fire. Although I think Portrait… is more textured, Ammonite certainly doesn’t pale in the comparison.

This is a mostly quiet film filled with quiet moments. Lee relies on a look here, a gesture there, to convey his story. That seems very in keeping with the social mores of the time. But he occasionally breaks out of his cool remove, notably in a couple of frank sex scenes. And a scene in which Mary sketches a sleeping Charlotte is surely a callback to the famous Kate Winslet/Leonardo DiCaprio scene in Titanic. Stephane Fontaine’s (Jackie) blue tinged cinematography adds lustre to the deliberate pacing.

The sparse dialogue in Lee’s script demands high-calibre performances from his cast, and they deliver. Kate Winslet is excellent in as the no-nonsense Mary. Saoirse Ronan (Little Women) matches her with a fine performance as the more demure Charlotte. Since the film revolves around their characters, the remainder of the cast are a little sidelined. However Alec Secareanu, Gemma Jones (Rocketman) and Fiona Shaw (Enola Holmes) all make an impression.

I found Ammonite a generally satisfying experience, even if I had to grapple with it. Although I have reservations about some of Lee’s choices, overall I found this unashamedly art-house film worked for me.

*An ammonite is a type of extinct mollusc with a spiral shell like a nautilus. One features in a famous (posthumous) portrait of Anning by B. J. Donne.