“You don’t stop playing games because you get older; you get older because you stop playing” was the raison d’etre behind the 2018 film Tag, in which a group of grown men, obsessed with the childhood game of tag, had turned it into a more physical competition that consumed their lives. A similar ethos drives the crass, appalling, cringeworthy and embarrassingly unfunny buddy comedy Buddy Games, which is already the frontrunner for the dubious title of the worst film of 2021. 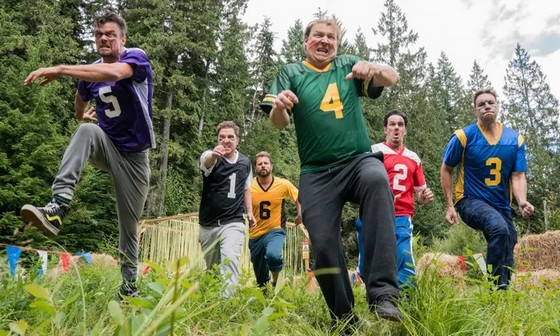 In this alleged comedy, a group of men, friends since childhood, gather together every year for a weekend of bogan Olympics, a series of debilitating Jackass-style physical activities, male bonding, beer drinking, putdowns, and adolescent challenges in which the men behave badly. The characters are unlikeable and grotesque, and these insufferable and boorish characters seem willing to eschew any form of stable relationship in order to continue their obsession with these juvenile and overly macho competitions.

The six friends consist of Bob aka “the Bobfather” (Josh Duhamel), a wealthy businessman who is the leader of the gang; Doc (Kevin Dillon), a doctor; Durfy (Dax Shepard), an insecure and struggling actor who lands gigs in commercials and working as a stand-in for major stars; the sad sack Sheldon (Dan Bakkedahl); the crass and obnoxious Bender (Nick Swardson); and the obviously gay Zane (James Roday), who still seems to be in the closet. However, the games came to an abrupt end five years earlier after Bender shot Shelly in the testicles with a paintball gun.

Now Sheldon is in rehab and in a dark place psychologically, having lost both testicles as result of that incident. His mother begs Bob to organise another weekend of the buddy games to try and help ease Sheldon out of his funk. Sheldon agrees to participate on the proviso that Bender is not invited. However, the brash and loud Bender does learn of the reunion games and turns up determined to rebuild his relationship with Sheldon and also win. There is plenty of tension and angst in the air, especially as Bob offers a $150,000 prize for the winner.

Cue lots of awkward and embarrassing challenges that involve consuming liquid laxatives, trying to pick up women in a dive bar, dangerous sports, and even drinking pina coladas spiked with semen, a new low point even for gross out comedies. We’ve seen these sorts of antics in just about every Judd Apatow comedy, but the whole thing here hits a new low in gross-out humour.
One of the few female characters is Tiffany (Olivia Munn), Bob’s long-suffering girlfriend who cooks pastries while dressed in skimpy lingerie. But mostly the women exist to be token sex objects.

Buddy Games is something of a vanity project for Duhamel, who has not only written the script, but also makes his feature film directorial debut here. But much of this is embarrassingly on the nose, the coarse humour is tasteless, uninspired, and largely unfunny. And the attempt to elicit some sympathy with its look at male bonding and redemption rings false and empty.

Buddy Games seems firmly aimed at teenage boys who will enjoy its relentlessly lowbrow aesthetic and physical humour. Everyone else should avoid this film!

Greg King
For more of Greg King’s writing on film, check out his blog at filmreviews.net.au