Victorian-era detective fiction gets turned on its head in Nexflix’s charming Enola Holmes. Based on the YA novels of Nancy Springer, this engaging – if a bit muddled – film sees the legendary Sherlock Holmes sidelined in favour of his precocious little sister. Throw in more than a liberal dose of danger, a foppish love interest and a hint of political intrigue and you’ve got a heady mix.

The film serves as a star vehicle for Millie Bobby Brown, who also acts as a producer. Brown shot to fame (at least within a particular demographic) playing the taciturn Eleven on the hit TV series Stranger Things. Enola is the polar opposite of Eleven – chirpy, talkative and lively. And Brown embraces the opportunity with both hands. She has real potential, and it wouldn’t surprise me if her career takes off. 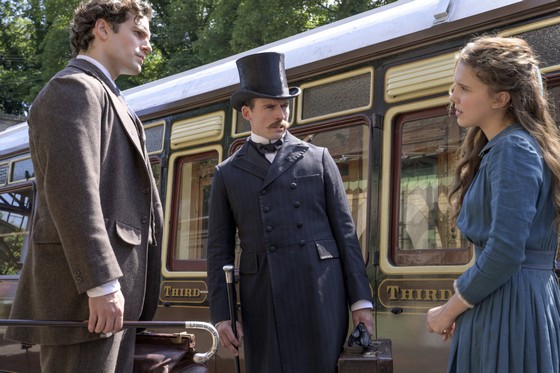 Enola (Brown) is the (much) younger sibling of Sherlock (Henry Cavill) and Mycroft (Sam Claflin). While Mycroft has settled into a stodgy government job, Sherlock is quickly making his name as a detective. No prizes for guessing who Enola wants to emulate. Her eccentric mother Eudoria (Helena Bonham Carter) has home-schooled her almost Shaolin-style, combining philosophy and classics with martial arts. But when Eudoria suddenly disappears, Mycroft (as the eldest) decides Enola is to have a regular education. His choice is a stuffy finishing school run by the stern Miss Harrison (Fiona Shaw). But, buoyed by finding a clue from her mother, Enola is having none of it. She skips out and hops on a train to London.

There she meets the charming but naive Marquis Tewksbury (Louis Partridge). Seems Tewksbury is in a spot of bother himself, with a vicious hitman named Linthorn (Burn Gorman) on his tail. After Enola’s quick thinking saves Tewksbury, the pair head to the capital, where they go their separate ways. But Enola soon finds herself in a world of women’s fight clubs, radical suffragettes and double-dealing rogues. And worse, both the police – in the form of Inspector Lestrade (Adeel Akhtar) – and Linthorn are on her tail.

As a mystery, Enola Holmes isn’t any world-beater. Looking out for a few well-placed clues will pretty much solve it about half way through. And the plot falls apart a bit in the third act as director Harry Bradbeer (Fleabag) tries to keep all the balls in the air. Screenwriter Jack Thorne (The Aeronauts) shoehorns quite a lot into the script – not just telling the story, but self-consciously setting up an already-anticipated sequel. I’m not sure her got the time period entirely right. The film is supposed set in 1884, but a few things seemed rather out-of-place. Also some of the threads start to unravel a bit, but I didn’t mind all that much. Much like its protagonist, the film barrels on with a bucketload of good intentions and boundless optimism.

With Brown at the centre of the film, the remaining actors have to serve as basically supports for her. The most sympathetic is Louis Partridge (Paddington 2) in the “damsel-in-distress” role as Tewksbury. Henry Cavill is a rather odd choice as Sherlock (and apparently this has caused some uproar within the Sherlock-verse), but gives an amiable performance. Much of the fun here though revolves around booing the almost-pantomime villains. Sam Claflin (The Nightingale) is suitably awful as the stuff-shirt Mycroft; but Burn Gorman (The Expanse) brings real menace as the nasty Linthorn.

Enola Holmes does a great job of introducing these characters and their world. It also plants the seeds for the seemingly inevitable sequels. While it’s certainly not perfect, it gets one thing completely right. Its optimistic outlook and sense of fun are exactly what I needed right now.