The worldwide hit Paddington  became the most successful non-US studio family film of all time. The sequel (predictably, Paddington 2) continues the story of the young Peruvian bear who came to London in search of a home. 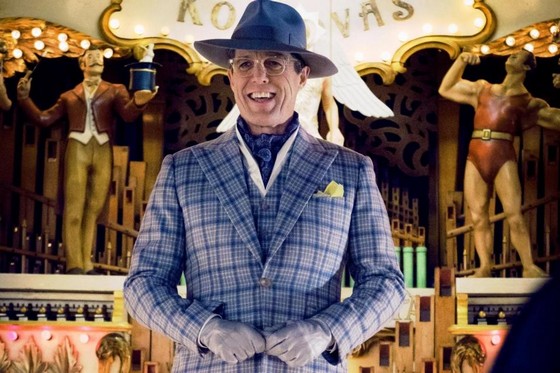 Having found that home with the Browns in Windsor Gardens, life is set for Paddington. While searching for the perfect present for his beloved Aunt Lucy’s (Imelda Staunton) forthcoming 100th birthday, Paddington spots a unique but expensive pop-up book in Mr Gruber’s (Jim Broadbent) antique shop. He embarks upon a series of odd jobs so he can raise enough money to buy it. But the book has also caught the eye of a local celebrity Phoenix Buchanan (Hugh Grant), whose designs on the hardback are less than altruistic.

Paddington Bear was first introduced to children in Michael Bond’s 1958 book, A Bear Called Paddington. Paddington’s Finest Hour, the last book written by Bond (who passed away in June this year) was released in January 2017.

In between, Bond wrote more than 20 books featuring the loveable bear. They’ve collectively sold 35 million copies worldwide and been translated into 40 languages.

The little bear from Peru, whose perfect manners and good intentions frequently lead to comical mishaps, has captured hearts the world over. The first movie appears to have done the same, maintaining the wonderful blend of warmth, whimsy and wit. Not surprisingly, the second sticks with the same tried-and-true formula.

Paul King is back as co-writer and director. His fellow writer in this one is Simon Farnaby, rather than Hamish McColl. Jon Croker (Desert Dancer) provides additional material. The main actors – Hugh Bonneville, Sally Hawkins, Julie Walters and, not to forget, Ben Whishaw as the voice of Paddington – return.

I saw Paddington 2 with a cinema packed full of kids; and they can be harsh critics. While they were understandably boisterous before the film started, the chatter stopped for the whole movie – a very good sign. Some of the sight gags are terrific.

The storyline is quite involved and totally and utterly preposterous, but then it is about a talking bear! Paddington’s kind nature is on display in everything he does. So too is his incompetence – which results in some of those gags I referred to. Above all though, his charm is a big winner.

Hugh Grant plays a most delightful cad. You could argue that this was the sort of role he was born to play. It’s a “look at me” performance. While his character is bound to get his comeuppance, he has a lot of fun along the way.

Remember to stay on as the credits roll, because the filmmakers do a good job wrapping up the storyline in those couple of minutes. Paddington 2 doesn’t have the darkness that a number of family movies do these days. I enjoyed portions of it very much. Although other elements were predictable and fanciful, I can see the appeal for youngsters.

In summary, the first one was better, but Paddington 2 is a decent sequel.