Johnny Saxby (Josh O’Connor, from TV series Peaky Blinders) is a sullen, morose young man working on his family farm in Francis Lee’s God’s Own Country. Since his father Martin (Ian Hart) suffered a debilitating stroke, he has had more responsibility loaded on his shoulders. It’s a hard and often lonely life for Johnny. He escapes the drudgery of his life through bouts of binge drinking at a local pub and anonymous gay sex. But afterwards he is filled with feelings of self-loathing and guilt. Things change for Johnny though when the family temporarily hire an itinerant Romanian worker named Gheorghe (played by relative newcomer Alec Secarneau) to help out during the busy lambing season. 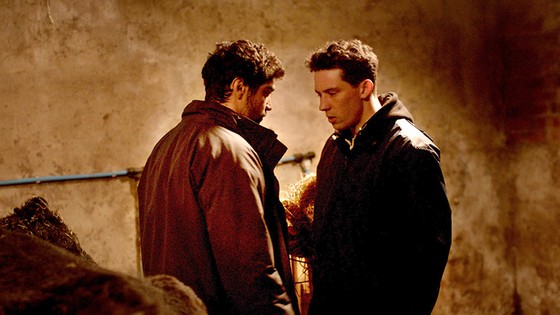 Having worked on the family farm back home Gheorghe has plenty of experience. This is revealed in a scene when he helps nurse a baby lamb back to life. His knowledge and passion soon awakens Johnny to the innate beauty around him and helps him see his world from a different perspective. But the attraction between the surly Johnny and the handsome Gheorghe soon becomes more physical. They have to spend a couple of nights in a spartan shelter while building a wall and watching over the flock. Their mutual attraction explodes with a raw, primal sex scene, shot in unflinching and frank style.

This gay coming-out drama set against the backdrop of the picturesque, but bleak windswept Yorkshire moors has invited comparisons to Ang Lee’s gay cowboy film Brokeback Mountain. But whereas Lee’s film had mainstream appeal, God’s Own Country is a far more austere work that will not have the same broad appeal. It is firmly in the tradition of those grim kitchen sink dramas beloved of British cinema of the 60’s, but also has the gritty realism of Mike Leigh. Nonetheless it is a moving, thoughtful, heartfelt and wonderfully nuanced drama that marks an impressive feature directorial debut for actor-turned-director Francis Lee. But the film also touches on broader contemporary themes such as class, identity, sexuality, a dying tradition, and the impact of European immigration in rural England.

Lee grew up on a Yorkshire farm, so he knows this territory well, and he gives the scenes depicting the daily routine of the farm a real sense of authenticity. He even has his two leads spend a couple of weeks working on a farm to bring authenticity to their performances as well. This is something of a love letter to the Yorkshire landscape as well, as Lee also captures the feelings and emotions of the setting and the characters with verisimilitude. But he doesn’t overly romanticise the settings. The film has been beautifully shot in widescreen by cinematographer Joshua James Richards, who comes from a background in short films, and he makes the oppressive and harsh landscapes seem eerily beautiful. And he gives the material a moody and brooding quality. Lee has a strong sense of visual style, and there are some striking visual compositions.

A former actor himself, Lee knows how to focus on the performances of his main cast. They deliver subtle, nuanced and compassionate performances. O’Connor brings a gruff masculine quality to his role as the repressed and lonely Johnny. But he also captures his feelings of insecurity and vulnerability. His Johnny is initially a hard character to warm to, but Gheorghe’s presence helps smooth out Johnny’s rough edges, and he learns to articulate his own feelings. There is a great rapport between him and Secarneau. The swarthy Secarneau is good as the more open and confident Gheorghe.

Hart (who played the young John Lennon in the biopic Nowhere Man) gives a strong performance as Johnny’s stern and disapproving father. Veteran actress Gemma Jones is largely cast against type as Diedre, Johnny’s grandmother, and she delivers a strong and sensitive performance.