Lip Service is a new Australian play that premiered in a separate production in London earlier this year with the title: Madame Rubenstein. That production featured the indomitable Miriam Margolyes, as Rubinstein and Frances Barber, as Elizabeth Arden.

At the Ensemble we have Amanda Muggelton playing Madame Rubinstein, and it is a performance that I loved a lot. A performance of comic skill and emotional truth, when required, bringing to bear a technical bravura from an actor that knows her theatrical ‘onions’. I was full of ‘wonder’. It could be described by some as ‘old-fashioned’. I could describe it as ‘old fashioned’ but it has a full heart, soul and set of exquisite theatrical ‘brains’ – technique – and is, therefore, glorious, because of it. I was full of warm admiration for her magnificent ‘managing’ of what Mr Misto gave her to work with. The emotional arc that she drew was breathtaking in its conviction and expression. I reckon, younger actors could learn a lot from what they will see if they go. A lesson in ‘grand’ acting technique. 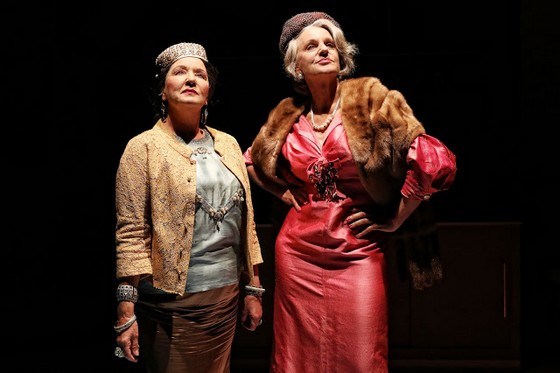 For what Mr Misto has given Ms Muggleton, and the other actors: Linden Wilkinson (Elizabeth Arden) and Tim Draxl (Patrick O’Higgins) is not much more than a lot of ‘lip’. These cardboard characters, on the page (I have read the play), fortunately, have a real-life biography to help the actors to flesh out what is not much more than lippy, campy grotesques, engaged in a battle of verbal one-upmanship that wallows in Jewish, Catholic, Irish and Homosexual/Gay put-downs of a voluminous number of a kind that may have been funny in a time and place past, but today, feels like a step back into a less nuanced social era – one that I am glad I, rarely, experience anymore. There is no doubt that Mr Misto has the gift for comedy and knows how to write, construct it, it’s just that Lip Service is a two hour play and not just a comic sketch, which except for moments when death treads the boards with his people, is all you get.

It is, cumulatively, tiring to sit through. A comedy of caricatures can’t hold for an entire evening without a story to build it from. It is the lesson that George F. Kaufman gave Moss Hart when they were writing their first play together Once in a Lifetime (1930). One longs for some more substance and considering the lives of his two principal figures, Helena Rubinstein and Elizabeth Arden, there is substance to be mined, a story to build from.

After the show I googled Helena Rubinstein and Elizabeth Arden. My gosh, here are two women who created business empires of some note over a very long time. Helena Rubinstein was born in 1872 lived until she was 92! Elizabeth Arden was born in 1878 and died at the age of 87! Some world history these women lived through and had the know-how -chutzpah – to build a business. Worth investigating what they did to achieve that in their time era don’t you think? (and, by the way, these women never met in life, and interestingly, Rubinstein, a Polish immigrant, began it all in Australia). Making them ‘monsters’ of cruel wit, alone, and that is the dominant impression of the characters in this play, is not respectful enough, I reckon. A question momentarily raised towards the end of the play of whether these titans of the cosmetic industry ’empowered’ or ‘exploited’ their customers seemed to be an interesting angle to base a play around. Earlier this year, there was a version of these two women in a new Broadway musical: War Paint  starring Patti LuPone and Christine Ebersole, that, it seems, did just that. 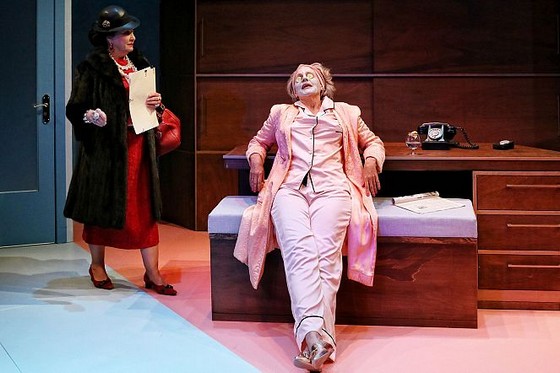 Linden Wilkinson slouches through her character’s combativeness, heavily costumed which is all Mr Misto asks her to do, while Tim Draxl as the Irish, ex-soldier, gay assistant to Rubinstein responds as only a verbal punching-bag can do: with a submissive empathy that descends to a musical bathos at its end on her death bed – this is the second time this year that we have seen Mr Draxl naked on stage – sexual objectification come full circle, I guess.

Director Nicole Buffoni manages, with designer Anna Gardiner, the many set changes in this small space and keeps it all cracking along, assisted by the lighting of Christopher Page. Daryl Wallis mixes the sound design with period memories to help us sit in the world past.

To see Ms Muggleton give a performance of some grace and judgement is a fair reason to see this production but go forewarned about the exhausting and disappointing formula of the writing. It is less lip service and more lip surface.