The Devil All the Time is a sprawling and multi-layered Southern Gothic tale of good and evil. The film offers a rich tapestry of amoral and unsavoury characters and explores that potent nexus between religion, sex and violence, fate and faith. 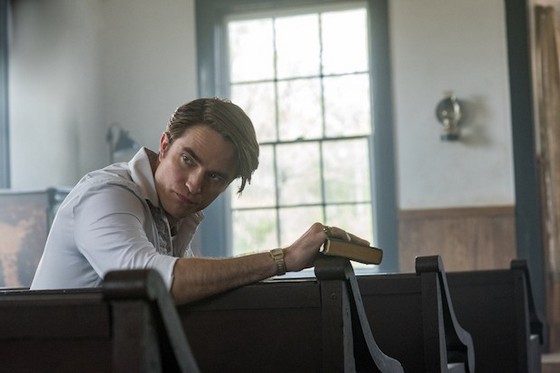 The atypical and nonlinear narrative spans a couple of decades between the end of WWII and the Vietnam War. It follows several characters from an Appalachian community who cross paths in disturbing ways.

The character who links all of the various characters and narrative strands is Arvin (played by Tom Holland) a troubled and taciturn loner. An extended opening section set in the late 50s gives us Arvin’s tragic backstory. His deeply religious father Willard (Bill Skarsgard) still carries the psychological scars from his experiences in WWII. He sees his mother die due to cancer and then sees his grief-stricken father commit suicide. He is subsequently raised by his grandparents, and feels protective towards his adopted stepsister Lenora (Eliza Scanlen). His father taught Arvin to handle his problems with violence.

A new arrival in the small town is the charismatic Reverend Preston Teagardin (Robert Pattinson, cast against type), a predatory priest. The Rev soon seduces Lenora while Arvin seems unable to intervene. Meanwhile, the necrophiliac Carl Henderson (Jason Clarke) and his wife Sandy (Riley Keough) are a pair of natural born and perverse serial killers prowling the byways and highways of Ohio and West Virginia for victims and preying on male hitchhikers. Sandy is the sister of Bodecker (Sebastian Stan), the ambitious and corrupt local sheriff.

The Devil All the Time is based on the acclaimed 2011 debut novel from Donald Ray Pollock. Director Antonio Campos (Christine) adapts the novel for the screen. Pollock himself provides the laconic voice over narration, reading straight from the source itself, which lends the material a noir-like tone. The Devil All the Time is a grim, bleak slow burn thriller and Campos takes his time bringing the various threads together. Editor Sofia Subercaseaux (Crystal Fairy and the Magic Cactus) does a fine job of shaping the material and juxtaposing the various strands. However, the complex narrative would probably have been better served as a miniseries for television, which have given the characters and setting room to breathe.

Campos elicits strong performances from his A-list cast, many of whom are cast against type. Pattinson (The Lighthouse) is particularly repellent as the unrepentant fire and brimstone preacher Teagardin. Holland, best known for playing the current incarnation of Spider-Man, delivers his most mature performance to date as the troubled Arvin. Harry Melling (from the Harry Potter series) briefly appears as another corrupt and delusional preacher, while Mia Wasikowska (Judy and Punch) is wasted in a fairly small and thankless role as his ill-fated wife. Skarsgard (better known for playing Pennywise, the killer clown from It) delivers a strong emotional performance as the deeply troubled Willard whose views on religion and violence shape Arvin’s life.

Cinematographer Lol Crawley (Vox Lux) creates some striking visual tableaux of the southern setting, giving the film a strong sense of place. He bathes the film in warm brownish hues while imbuing the material with a sinister undertone. Craig Lathrop’s superb production design reeks of authenticity and captures the period detail and small town ambience.

The Devil All the Time is now streaming on Netflix