Judy and Punch is a real mixed bag. This Australian production from actor-turned-director Mirrah Foulkes is something of a breakthrough for the local industry. It proves Australian cinema can be more than just sunshine, beaches and gritty dramas. But its wildly uneven tone and confronting themes will test audiences’ patience. 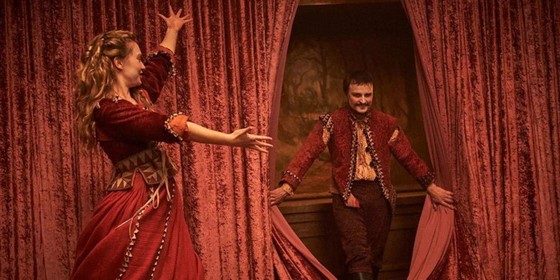 Domestic violence presents a huge challenge for our society. Despite years of high-profile campaigns, it seems just as prevalent and damaging as ever. Foulkes uses Judy and Punch to highlight the issues in a way that’s both confronting and problematic. Of course, this a reflection of the old-style Punch & Judy shows, with their even more problematic mix of violence and humour. But the allusion doesn’t make the film any easier to stomach.

Judy and Punch is set in the fictional town of Seaside (nowhere near the sea). Judy (Mia Wasikowska) plays second-fiddle to her husband Punch (Damon Herriman) in their puppet show; even though she’s just as (maybe more) talented. Their dream is to make enough money to move on from Seaside and play bigger towns. Punch however is a mean, violent alcoholic, which imposes a huge obstacle to the couple’s plans. Punch’s troubles multiply when he gets drunk once too often and tragedy ensues. This leads Judy to extract a terrible price in retribution.

The film includes many tropes of the old puppet show – an ineffectual policeman, a mislaid baby, a mischevious dog – but it also depicts gruesome executions, horrific violence and rampant misogyny. Yes, the point is that the misogyny feeds into the violence, and vice versa, but the tonal shifts are sudden and brutal. That makes if difficult to stay with the film as it veers between comedy, drama and pathos.

Foulkes makes her feature film directing debut using her own script. She does a good job keeping everything pretty much on the rails. A couple of “dead” patches slow the action, and the more over-the-top scenes could have used a lighter touch, but Foulkes generally remains in control. Stephan Duscio’s lush cinematography gives the film a great look.

Mia Wasikowska is spectacular in the role of Judy. She remains compelling, even when the events on screen are hard to watch. Damon Herriman is also excellent in the difficult role of Punch. The character is a real dirtbag, but Herriman revels in finding all his dark places. Benedict Hardie also does well with the more limited role of Constable Derrick; while Tom Budge muscles up as the boorish Mr Frankly. Look out for veteran Terry Norris as the dementia-affected Scaramouche.

Judy and Punch is easy to admire but difficult to like. It plays out as an uneasy mix of social commentary and brutal revenge fantasy. And while all the pieces might fit together intellectually, it struggles to connect on a more human level.