The most problematic of the Marvel superheroes is given a reboot in Spider-Man: Homecoming. When I say problematic, I mean because of his movie history more than anything else. In just the past 15 years, there have been no less than six movies featuring the teenage web-slinger. Sam Raimi’s 2002 – 07 trilogy starring Tobey Maguire and Kirsten Dunst was followed by Marc Webb’s 2012 – 14 duo with Andrew Garfield and Emma Stone. Then Tom Holland’s version of the character was introduced in last year’s Captain America: Civil War. Now he gets his own stand-alone movie. 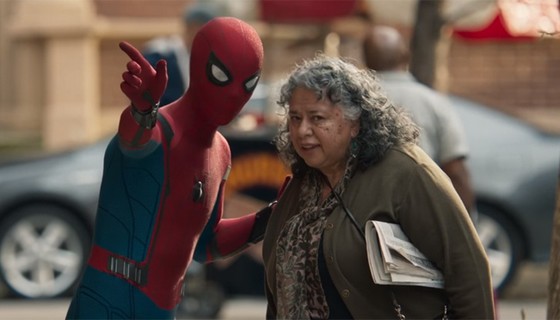 Jon Watts directs, from a script by a team led by Jonathan Goldstein. Watts’ pedigree from this rather prestigious gig is a little thin. His best-known effort to date was probably the Kevin Bacon thriller Cop Car. That said, he does a commendable job here without threatening to break the mould.

The film opens in the aftermath of (I think) The Avengers. Work crews are tasked with cleaning up the city. This includes the ruined Avengers’ HQ. Loads of alien tech lying around the site however sees the intervention of a shadowy agency. They take over the site, putting the crews – including foreman Adrian Toombes (Michael Keaton) – out of work. Not all the tech is secured however, and Toombes manages to smuggle some of it out. Flash forward 8 years and Toombes is the head of a gang selling super-weapons on the black market. Supplies of raw materials however are running low, causing the gang to stage ever-more risky heists to get them.

Meanwhile, Peter Parker (Holland) is back in school after his adventures with the divided Avengers in Germany. Tony Stark (Robert Downey Jr) has assigned Happy (Jon Favreau) to mentor the young Spider-Man. It’s not a job Happy relishes however. Peter is instructed to lay low for the time being. But when Spider-Man foils robbery in which one of the super-weapons is used, he comes to realise something larger is at play. Plus he has to deal with school work, his nosy best friend Ned (Jacob Batalon) and the (unattainble) girl of his dreams, Liz (Laura Harrier). Oh, and the school homecoming dance.

Despite being the result of a team effort, the script is pretty clever. Just where it fits in the Avengers timeline is a bit hazy, but it delivers what you’ve come to expect. Of course, the film features a series of increasingly spectacular set-pieces. They’re beefed up with some character development and rising stakes for our young hero.

The scriptwriters have cleverly avoided any origin story here. That would be superfluous. So Peter arrives on screen as a fully fledged superhero; even if his still has training wheels on. Some knowledge of the Avengers series is helpful, as the film includes a number of call-backs to those other movies. The script also delivers a fantastic twist near the end. And Watts builds in a number of subtle but smart visual jokes.

The film treats Peter like an average teenager – which in a way he is. This contrasts the likes of Thor and Iron Man, who are accorded reverential status. He has to battle the everyday troubles of adolescence; as well as the bad guys.

As you’d expect, there’s a heavy reliance on CGI here. It almost permeates the movie. Unlike some movies of its ilk though, the CGI is actually used in service of the story, not an end in itself. The climactic showdown provides an great example of how CGI should be used. That sequence alone is worth the admission price.

Tom Holland (In the Heart of the Sea) is so affable as Peter, you can’t help but like him. Michael Keaton, famous of course for Birdman, plays a different kind of bird as Toombes, who dons a set of mechanical wings to become the villain Vulture. Robert Downey Jr does his now-patented Tony Stark thing; while Marisa Tomei (The Big Short) returns as May (no “aunt” here) with a likeable performance. Jacob Batalon provides much of the comedy; while Laura Harris does most of the glamour. Props also to teen idol Zendaya and to Donald Glover for playing against type.

Whether you’re a Marvel fan or not, I can pretty much guarantee you won’t be bored with Spider-Man: Homecoming. This is polished popcorn entertainment that delivers what it promises. It might not be deep, but it is fun.