The world is confusing. Events happen – and are reported – at breakneck speed thanks to digital technology. But that same technology can be manipulated by unscrupulous people. So how do we know what’s real and what’s fake? That’s tough to work out. But the surprising thing is that the latest Marvel movie, Spider-Man: Far From Home, is one of the year’s more accessible and perceptive takes on that issue. I mean, who wants to listen to panels of experts droning on when superheroes can take you on a ride that cleverly highlights the issue?

Of course, the meta-irony is that director Jon Watts (Spider-Man: Homecoming) and his team have used tons of digital technology and manipulated millions of digital images to make the move in the first place. 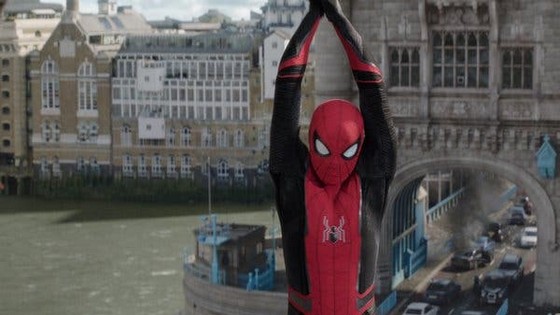 This installment of the Spider-Man vector in the Marvel Cinematic Universe picks up pretty much where Homecoming left off. It also maintains the earlier film’s light touch and sense of fun; a neat contrast to the existential dread and sombre reflection of Avengers: Endgame.

It’s the end of the school year and 16-year-old Peter Parker (Tom Holland) is looking forward to a school trip to Europe. It’s supposed to be an educational trip to explore facets of science; although Nick Fury (Samuel L Jackson) has other ideas. He wants Peter’s alter ego Spider-Man to embrace his superhero destiny. But all Peter wants to do is travel – and tell MJ (Zendaya) how he feels about her on their last stop in Paris. Their first stop is Venice, where a trip to a museum is interrupted by a terrifying creature that emerges from the lagoon. Spider-Man tries to help out but the creature is too strong. Luckily, a strange new hero emerges to vanquish the foe.

Fury soon introduces Peter to Quentin Beck – a.k.a. Mysterio (Jake Gyllenhaal). Seems Mysterio is a hero from an alternate reality and has been tracking the monsters, known as Elements, across the universe. Mysterio believes another monster will soon emerge in Prague; so Fury manipulates the school trip’s itinerary to send them to the Czech capital. On the way there, Peter discovers Tony Stark has bequeathed him some cool new tech. It’s a pair of innocuous-looking glasses; but they hold a powerful new technology dubbed EDITH. Sure enough, once in Prague the new nemesis emerges; and Mysterio is once again able to take it down. Peter becomes convinced Mysterio is the future of the Avengers. He hands EDITH over to Beck, believing he can make better use of the tech.

Spider-Man: Far From Home doesn’t take itself too seriously. Watts and the screenwriting team of Chris McKenna and Erik Sommers have crafted another slick film that ticks many of the boxes. They include tapping into teenage psychology in an clever but funny way; and injecting plenty of gags to lighten the mood. It’s great entertainment, but it has a brain as well. It neatly critiques what we know refer to as “fake news” (a term that’s, ironically, often fake itself). The peak of that critique comes in a brilliant mid-credits sequence, so be sure to stick around (another scene appears at the very end, FYI). It’s not perfect by any means – some of the plotting is very sloppy, for example – but it’s certainly a ride.

Tom Holland continues to be everyone’s favourite puppy-eyed superhero as Spider-Man. The script doesn’t make great demands on him, but he infuses the character with a lot of charm. Jake Gyllenhaal brings a depth to Mysterio that perhaps the script doesn’t really deserve. Samuel L Jackson does Fury as only he can. Zendaya plays it pretty straight as MJ; while Angourie Rice and Jacob Batalon have a lot of fun as lovestruck teens. Marisa Tomei gives solid support as May; while Jon Favreau lends comic relief as Happy Hogan.

Without doubt, Spider-Man: Far From Home is entertaining. In the wider MCU, it’s a fairly slight entry; but it has broad appeal. At the preview screening, kids, teens and adults all thoroughly enjoyed it. And that, for me, is what a school holiday movie should be all about.