I nearly decided not to review Avengers: Endgame. After all, the film is pretty much “review-proof”. If you have even the slightest interest in the Marvel Cinematic Universe (MCU, for the uninitiated), you’re probably going to see it regardless. If you have no such interest, seeing it will be pretty pointless. But in the end, this film is such a rich trove of goodies, it compelled me to write a review. 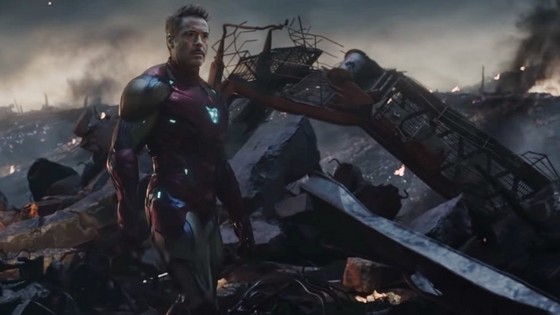 The Russo brothers – Anthony and Joe – are back in the directors’ chairs after Avengers: Infinity War. This is a far more complex and interesting movie than Infinity War. Where that film left me pretty cold, this sequel allows the Russos to show their chops. They get to play around with style, genre and popular culture. One of the movie’s hallmarks is its shifts in tone. For the most part (as in the extended battle sequences) it’s a straight-up superhero adventure with all the CGI-fuelled action you’d expect. But it’s also – at times – a sci-fi movie, a space opera a la Star Wars, and a memoir of times lost. Heck, it’s occasionally like a Noah Baumbach movie in which the characters sit around and discuss their feelings!

They also have fun with some sly – and not so sly – pop culture references. Gladiator, The Big Lebowski and Blade Runner all get visual tributes. And since the plot involves time travel, Endgame heavily (and directly) references films like Back to the Future and Terminator.

As for that plot, I don’t want to give too much away. Suffice to say it principally involves the Avengers who survived Infinity War without being turned to dust travelling through time to try to undo the devastation wrought by Thanos (Josh Brolin). The bulk of the movie takes place five years after the events of Infinity War. Captain America (Chris Evans), Black Widow (Scarlett Johansson) and Hulk (Mark Ruffalo) are grieving the loss of their friends. Iron Man (Robert Downey Jr) has moved on and started a family with Pepper Potts (Gwyneth Paltrow). Thor (Chris Hemsworth) has let himself slide into alcoholism and depression. Hawkeye (Jeremy Renner) has lost himself in a different way.

But the return of Ant-Man (Paul Rudd) from the quantum realm (see Ant-Man and the Wasp) catalyses a new plan to travel back in time and retrieve the Infinity Stones before Thanos can get to them.

Endgame is long – 3 hours long – but I really didn’t notice the time. The Russos’ direction this time around is much tighter, and despite the longer running time, the editing is very effective. They inject a lot more light-and-shade into the film, after the relentless dourness of Infinity War. Screenwriters Christopher Markus and Stephen McFeely find more emotion in the characters. And they shoehorn in more – and funnier – humour.

The Russos use “retro-fitting” CGI (seen recently in Captain Marvel to make older actors appear younger) to great effect. The technology seems to have improved, and is employed to great effect in reverse at the end of the film.

If you’ve followed even a little of the press around this movie, you’ll know it marks the end (I mean, it’s right there in the title) for some MCU characters. Again, without giving anything away, I will say you might not expect who they turn out to be. In the end credits, several actors literally “sign off” on the series. It also marks a transition point between MCU 2.0 and MCU 3.0. Apart from different characters, the key difference seems to be that MCU 3.0 will concentrate on TV rather than movies.

I don’t see much point in discussing the performances in any depth, especially given the myriad of characters coming and going through the film. However Scarlett Johansson and Jeremy Renner both get more significant roles and handle them with assurance. Chris Hemsworth gets to shed the heroic Thor in favour of a sadder, but more human, character.

Avengers: Infinity War seems an appropriate place to leave the Avengers series. It actually delivers a sense of closure without holding onto any prospect of an ill-considered sequel. The Russo brothers deliver a fitting tribute to characters who’ve been part of our lives for several years now. And really, you can’t ask for much more than that.