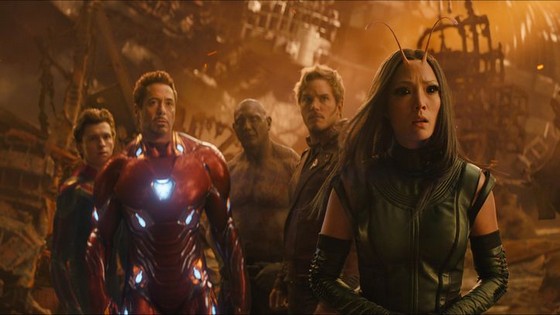 Avengers: Infinity War turns out to be two things. First, it’s a “bridging” movie in between the first two Avengers movies and the still-untitled sequel due in 2019. It’s also a two and a half hour contemplation on the “trolley problem”. Well, maybe not so much “contemplation” as passing reference soon overtaken by lots of fighting and destruction.

The plot basically mashes the Guardians of the Galaxy story arc into an Avengers setting. Remember in Guardians of the Galaxy Vol. 2 how Gamora (Zoe Saldana) was having some daddy issues? Well, daddy turns out to be Thanos (an unrecognisable Josh Brolin). He’s your average mega-powerful intergalactic douchebag with genocide on his mind. But all that jumping from one planet to another killing stuff is just soooo tedious, right. So Thanos has a new plan: to gather the six “infinity stones” which will (somehow, I dunno) give him the power to wipe out half of all life in the universe at a whim. That brings him into conflict with the Avengers who, you know, don’t really dig on half of humanity being exterminated. They have two of the stones in safe keeping; while Thor (Chris Hemsworth) has a third. But Thanos and his minions are very determined. So – battle showdown!

The film is a mile wide and an inch deep. There’s plenty of spectacle here, but not a lot of character development or even story progression. The ending doesn’t so much set out the sequel as stand around waiting for it to arrive. As mentioned, this is a bridging movie – a bit like the first half of those final franchise installments (a la Harry Potter and the Deathly Hallows Part 1). The whole point of this isn’t to make a movie in its own right. It exists only to get the audience to the final showdown. And if you stick around, you can check where it’s headed in one of the patented MCU post-credits scenes.

All that said, it does what it does really well. It looks great (a couple of wonky CGI scenes aside), has strong production values and an apt score from Alan Silvestri. The battle sequences are quite epic. I could have done with more Earth and less space, but that’s just me. The screenwriters pepper the script with some decent jokes, particularly in the first half. No one’s in the mood for laughing in the ultra-serious second half.

The cast is massive, and it descends into a case of “spot the actor” at some points. Chris Hemsworth gets the most screen time as Thor, but Robert Downey Jr also gets to chew some scenery. Chris Evans, Scarlett Johansson, Paul Bettany and Tom Holland put in solid turns. I was pleased to see Elizabeth Olsen and Benedict Cumberbatch get some meatier roles as Scarlet Witch and Dr Strange respectively.

As a piece of pure pop culture, Avengers: Infinity War ticks of every 10 year-old boy’s ultimate fantasy. This is almost the dictionary definition of popcorn entertainment. And there’s absolutely nothing wrong with that. Just don’t go into this expecting anything more.