[7:00 pm] I’m sitting with a drink and snack ready for Captain Marvel. The crowd at the (full) preview screening is buzzing.

[7:05] Oh, they’ve done something cool with the opening credits. Nice.

[7:15] Okay so Carol Danvers (Brie Larson) is known as Vers (pronounced “veers”) and is a warrior-in-training with the Kree. They’re an alien race who look like humans, and I vaguely recall they might have had something to do with Guardians of the Galaxy. Anyway, she fights with Yon-Rigg (Jude Law) and has a meeting with the Supreme Intelligence (Annette Bening). She’s sent on a mission to take down some Skrulls. They’re an alien race who look like lizards. Except they can shape-shift. Also, weird montage. I’m so confused. 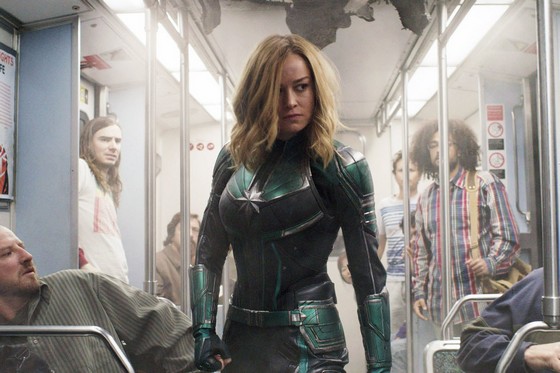 [7:40] The mission against the Skrulls hasn’t gone well. Danvers is captured; but manages to escape. She finds herself on a bizarre planet called C-53, which looks an awful lot like Earth. Oh wait, there’s a Blockbuster Video. It is Earth. It’s also the 1990s. Gnarly dude.

[8:00] Fury has gained Danvers’ trust and vice versa. She convinces him about the urgency of a possible Skrull invasion. They sneak into a government lab which is linked to a scientist (also Annette Bening) who may hold the key to the Skrulls’ intentions. But Fury’s boss Keller (Ben Mendelsohn) turns out to be a Skrull – thus making him (I think) the very first extra-terrestrial with an Aussie accent.

[8:15] I’m really getting into it now. We’ve been introduced to Maria Rambeau (Lashana Lynch). She’s recognised Danvers as her former air force buddy. Danvers it seems was believed killed in the crash of an experimental aircraft. Rambeau has a cute daughter Monica (Akira Akbar). We meet a cat named Goose (pop-culture reference alert!). He’ll play a significant role later on.

[8:40] Things are really getting hot now. Secrets are revealed. Connections are made. The ultimate showdown is set up. I’m loving Brie Larson’s performance. Just the right blend of superhero seriousness, wise-cracking and bad-assery. She really hits the film’s girl-power themes hard. Lashana Lynch provides strong support. I notice that although Samuel L Jackon’s face looks like he’s 30, his body moves like he’s 70 (which he is).

[8:50] It’s all happening. Big battle (what else did you expect?). There’s an odd mix of cutting-edge CGI and some stuff that looks like it was done on an Atari in the 90s. Weird. Anyway, Danvers [spoiler] to [spoiler] and [spoiler]. She then [spoiler] before [spoiler]. Whew!

[9:00] Wow, that was quite a trip. Oh wait, it’s a Marvel movie. Better stick around for the end credits.

[9:05] Okay, that post-credits scene is important. Also, it occurs to me that the film closes a whole lot of loops in the MCU.

[9:10] I leave the cinema having really enjoyed Captain Marvel. Maybe it’s not groundbreaking in the same way that other Marvel movies have been, but it’s a ride. It’s also a ride with a powerful message for girls in particular.