Friends and family gather for a weekend in the countryside in Michael Mayer’s version of Chekhov’s The Seagull. While everyone is caught up in passionately loving someone who loves somebody else, a tragicomedy unfolds about the eternal desire to live a purposeful life. 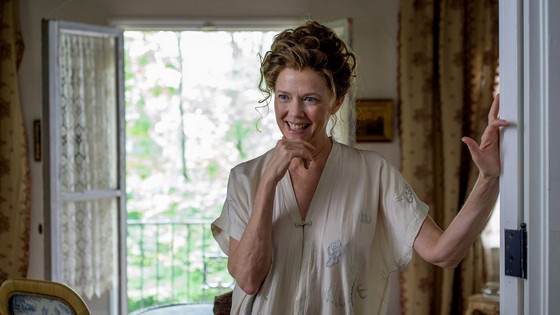 Sorin (Brian Dennehy), a retired government employee, and his sister Irina (Annette Bening), a legendary actress from the Moscow stage, have invited a group to their country estate. Irina is imperious and selfish. She’s also anxious about holding on to her star status and the affections of her younger lover, Boris Trigorin (Corey Stoll), a successful writer of short stories. Irina constantly belittles her aspiring writer son Konstantin (Billy Howle), perhaps because his existence as a grown man reminds her that age is catching up with her.

While he loves his mother despite her cruelty, Konstantin acts out his insecurity and anger by rejecting both her style of theatre and Boris’s writing, declaring them old-fashioned and banal. A dreamer, Konstantin declares he will create superior new forms of theatre and literature.

Konstantin is head over heels for Nina (Saoirse Ronan), a beautiful but naïve local girl who dreams of being an actress. Konstantin gives her the starring role in his latest play. Nina feels flattered; but her head is soon turned by another. Masha (Elisabeth Moss), the forlorn daughter of Sorin’s estate manager Shamrayev (Glenn Fleshler) and his wife Polina (Mare Winningham), suffers an unrequited love for Konstantin, who insensitively spurns her.

She scorns the insipid schoolteacher Medvedenko (Michael Zegen). But he refuses to be discouraged and accepts any crumbs of attention she drops him. And on it goes.

Tony-winning playwright Stephen Karam adapted Chekhov’s classic play for the screen. It explores, with comedy and melancholy, the obsessive nature of love, the tangled relationships between parents and children, and the value and toll of art. Unfortunately, this version was far from impressive. It became overly melodramatic and too repetitive. The whole thing looked and felt staged.

Some of the acting was decidedly second-rate, although I wouldn’t say that about Saoirse Ronan or Annette Bening.

I found it a major disappointment, all the more so because of the stellar cast assembled. Credibility was lacking. More than that, or arguably because of that, audience involvement was all but non-existent. I didn’t really care for or about the characters enough. And since the source material is so masterful, I expected nuance. Again, I was sadly mistaken.

While Mayer might have meant well, The Seagull ends up being heavy-handed.